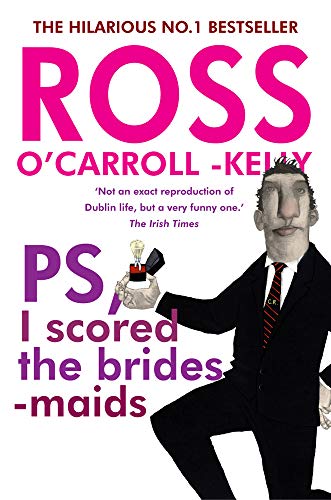 So there I was, roysh, twenty-three years of age, still, like, gorgeous and rich ... when all of a sudden life becomes a total mare.

With a new introduction by Paul Howard, Ross's representative on, loike, earth.

So there I was, roysh, twenty-three years of age, still, like, gorgeous and rich, living off my legend as a schools rugby player, scoring the birds, being the man, when all of a sudden, roysh, life becomes a total mare. I don't have a Betty Blue what's wrong, but I can't eat, can't sleep, I don't even want to do the old beast with two backs, which means a major problem, and we're talking big time here. Normally my head is so full of, like thoughts, but now I'm down to just one: Sorcha, I'm playing it Kool and the Gang, but this is basically scary. I mean, I'm Ross O'Carroll-Kelly, for fock's sake, I don't do love.

With a new introduction by Paul Howard, Ross's representative on, loike, earth.

'Auld Ross is a bit of a 'love him or hate him' character. It probably helps if you have encountered a similar type in real life (and it's hard not to if you live in Dublin or went/go to UCD) - then Ross' delusions are entertainingly familiar. But if you don't know what 'morketing' is or the words 'Kielys' and 'Anabels' are just girls names to you, then you may not get the joke. Roysh?'

'Written phonetically in the voice of a south Dublin native, the text is littered with teenage slang, inappropriate language and a politically incorrect attitude fuelled by copious drinking.'

'This guy is so hilariously arrogant, obnoxious and clueless that you have to laugh rather than hate. It makes you glad you are slightly normal.'

Read him and weep, and pray your children never end up living or sounding like him. ... Not an exact reproduction of Dublin life, but a very funny one.

'This book would make an excellent stocking filler -- and a great way to pass a St Stephens Day afternoon.'

'Howard's crackerbarrel of laughs rides again, if you can stand it.'

'The Ross O'Carroll Kelly books are pretty much a cultural phenomenon. In the best tradition of Catcher in the Rye, Huckleberry Finn and closer to home A Portrait of the Artist as a Young Man they follow a callow youth taking and making the difficult journey into adulthood.'

Paul Howard helps Ross O'Carroll-Kelly to write his autobiographical series, largely because Ross can't really write, roysh? Find out more at rossocarrollkelly.com. He is also the author of the bestselling prison expose, The Joy, and co-author of Celtic Warrior, the autobiography of boxer Steve Collins. A former Sports Journalist of the Year, Paul covered the World Cup in Japan and Korea in 2002, and the rugby World Cup in Australia in 2003. His account of the Irish soccer squad and the notorious drama in Saipan, The Gaffers: Mick McCarthy, Roy Keane and the Team they Built, was a bestseller. Paul has also written several massively popular plays and has won the popular fiction prize at the Irish Book Awards three times for books in the Ross O'Carroll-Kelly series.