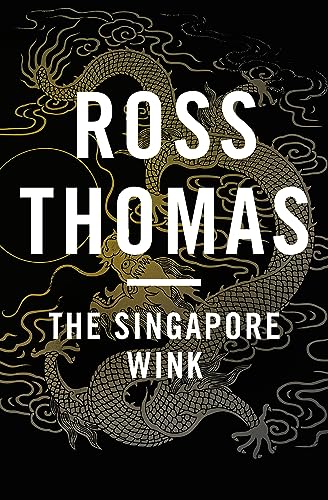 The Singapore Wink
by Ross Thomas

The Singapore Wink by Ross Thomas

A tragic past traps a former Hollywood stuntman in a web of international intrigue-from "America's best storyteller" (The New York Times Book Review).
Two pirates do battle on an old junk ship in Singapore Harbor. They leap nimbly from deck to rigging, crossing swords like fencing masters. And then one surprises the other, slicing a rope and sending the unfortunate pirate tumbling into the bay. This is how stuntman Angelo Sacchetti dies. Edward Cauthorne was his opponent, a fellow stuntman whose career died along with Sacchetti. He's selling used cars when two thugs approach him. They're emissaries from Sacchetti's godfather, a Mafia don. Sacchetti is alive after all-alive enough to be blackmailing the don-and they firmly request that Cauthorne find him. The search takes Cauthorne back to Singapore, to risk his own life for the sake of the man he thought he'd killed.

The winner of the inaugural Gumshoe Lifetime Achievement Award, Ross Thomas (1926-1995) was a prolific author whose political thrillers drew praise for their blend of wit and suspense. Born in Oklahoma City, Thomas grew up during the Great Depression, and served in the Philippines during World War II. After the war, he worked as a foreign correspondent, public relations official, and political strategist before publishing his first novel, The Cold War Swap (1967), based on his experience working in Bonn, Germany. The novel was a hit, winning Thomas an Edgar Award for Best First Novel and establishing the characters Mac McCorkle and Mike Padillo. Thomas followed it up with three more novels about McCorkle and Padillo, the last of which was published in 1990. He wrote nearly a book a year for twenty-five years, occasionally under the pen name Oliver Bleeck, and won the Edgar Award for Best Novel with Briarpatch (1984). Thomas died of lung cancer in California in 1995, a year after publishing his final novel, Ah, Treachery!

GOR008733700
The Singapore Wink by Ross Thomas
Ross Thomas
Used - Very Good
Paperback
Open Road Media
2013-01-31
224
1453234772
9781453234778
N/A
Book picture is for illustrative purposes only, actual binding, cover or edition may vary.
This is a used book - there is no escaping the fact it has been read by someone else and it will show signs of wear and previous use. Overall we expect it to be in very good condition, but if you are not entirely satisfied please get in touch with us.