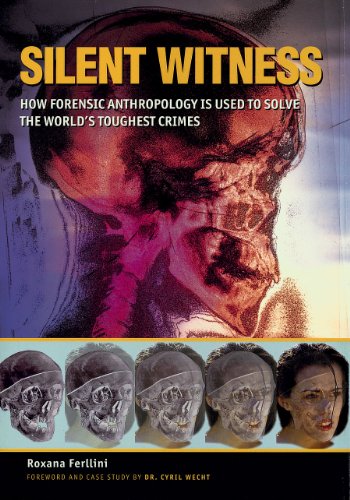 Readers are invited to go behind the crime scenes with forensic anthropologists and learn about their techniques, how they locate a body, and how they carefully uncover evidence. Includes 29 real-life case studies and 350+ color photos & illustrations.

Silent Witness: How Forensic Anthropology is Used to Solve the World's Toughest Crimes by Roxana Ferllini

"Bones have an uncanny knack of holding important clues as to the fate of the individuals to whom they belonged."

As portrayed in mystery novels and more than nine television shows including CSI: Crime Scene Investigation, American Justice and City Confidential, forensic anthropologists work in an environment where the stakes are high, the pressure is intense, and their findings are vital in criminal investigations. It's a fascinating and often dramatic world.

Go behind the scenes with forensic anthropologists and learn about their techniques, how they locate a body, how they carefully uncover evidence, and how the unique characteristics of each body bears silent witness to age, sex, cause of death and clues as to who or what was responsible.

With 29 real-life case studies and more than 350 color photographs and illustrations, Silent Witness is a fascinating read for anyone interested in the world of forensics.

This is an arresting book, describing in both text and photographs the techniques and cases involved, with also quietly expressing the motivations of the practicing scientist.--D.Yvonne Jones"Public Libraries" (10/01/2006)
Informative and visually impacting overview of the use of forensic science.--Linda Plwowarczyk"Chicago Sun papers" (06/19/2003)
Ferllini draws on her wide experience to produce a fascinating look at her profession's capability to illuminate history's mysteries and to assist in investigations of crime scenes.--Dori DeSpain"School Library Journal" (03/01/2003)
An important introduction to the science of forensic anthropology.--Janet Julian"Kliatt" (01/15/2003)
Informative and entertaining ... I would recommend this text to anyone with an interest in forensic studies generally and anthropology particularly.-- (04/21/2003)
This book should be of considerable interest to a broad range of general readers ... recommended.-- (04/01/2003)
Although her explanations are clinical, Ferllini yet possesses the ability to communicate the solace that the forensic anthropologist's closure can provide to loved ones and to society at large ... Exciting application of science will hook even reluctant readers; does include graphic crime descriptions.-- (08/01/2002)

GOR004264474
9781552976241
1552976246
Silent Witness: How Forensic Anthropology is Used to Solve the World's Toughest Crimes by Roxana Ferllini
Roxana Ferllini
Used - Very Good
Paperback
Firefly Books Ltd
2002-09-29
192
N/A
Book picture is for illustrative purposes only, actual binding, cover or edition may vary.
This is a used book - there is no escaping the fact it has been read by someone else and it will show signs of wear and previous use. Overall we expect it to be in very good condition, but if you are not entirely satisfied please get in touch with us
Trustpilot