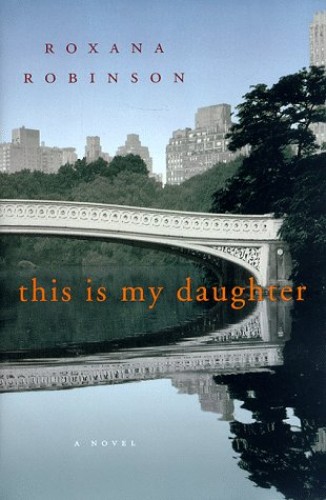 This is My Daughter by Roxana Robinson

Charts the struggles of two divorced parents to build a new family with their two daughters.

This is My Daughter by Roxana Robinson

"This is My Daughter" charts the struggles of two divorced parents to build a new family with their two daughters. The girls, however, have their own ideas.
Colleen Kelly Warren

A clear-eyed, poignant story of a family in crisis.

Glitters not with rich trappings, but rich with understanding of its people.

A portrait of parenthood, with all its wild loves and anguished fears...compulsively readable.

With almost perfect pitch, Robinson captures the clash of worldviews between adults and young children.

Robinson writes with slow-motion precision. She registers every last gesture and nuance and gets it all right.

Robinson's impressive new novel grows on you...so slowly you discover how truly ambitious and tough its intentions are.

Compelling...after reading this exceptional novel, it may be hard to think about remarriage without this book coming to mind.

Nearly perfect prose...there isn't an awkward phrase or false note in the entire work, Robinson depicts this family's struggle to survive with unerring intelligence and grace.

Robinson's strength as a novelist rests in her ability to create the texture of life...."This Is My Daughter" shows us that it is -- as Robinson writes -- brave to be independent

and braver still to engage.

GOR002119144
9780747545903
0747545901
This is My Daughter by Roxana Robinson
Roxana Robinson
Used - Very Good
Paperback
Bloomsbury Publishing PLC
2000-07-03
404
N/A
Book picture is for illustrative purposes only, actual binding, cover or edition may vary.
This is a used book - there is no escaping the fact it has been read by someone else and it will show signs of wear and previous use. Overall we expect it to be in very good condition, but if you are not entirely satisfied please get in touch with us
Trustpilot