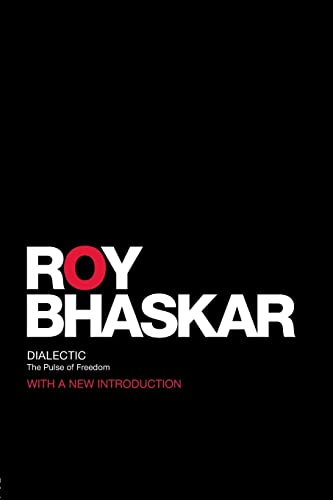 Dealing with contemporary philosophy, this book sets itself three main aims: the development of a general theory of dialectic, of which Hegelian dialectic can be seen to be a special case; the dialectical enrichment and deepening of critical realism; and the outline of the elements of a totalizing critique of Western philosophy.

Dialectic: The Pulse of Freedom by Roy Bhaskar

Dialectic is now widely regarded as a classic of contemporary philosophy. This book, first published in 1993, sets itself three main aims: the development of a general theory of dialectic, of which Hegelian dialectic can be seen to be a special case; the dialectical enrichment and deepening of critical realism, viz. into the system of dialectical critical realism; and the outline of the elements of a totalizing critique of Western philosophy.

The first chapter clarifies the rational core of Hegelian dialectic. Chapter two then proceeds to develop a general theory of dialectic. Isolating the fallacy of 'ontological monovalence', Roy Bhaskar then shows how absence and other negating concepts such as contradiction have a legitimate and necessary ontological employment. He then goes on to give a synoptic account of key dialectical concepts such as the concrete universal; to sketch the further dialectical development of critical naturalism through an account of what he calls four-planar social being; and following consideration of the dialectical critique of analytical reason, he moves on to the real definition of dialectic as absenting absence and in the human sphere, the axiology of freedom.

Chapter three extends and deepens critical realism's characteristic concerns with ontology, science, social science and emancipation not only into the realms of negativity and totality, but also into the fields of reference and truth, spatio-temporality, tense and process, the logic of dialectical universalizability and on to the plane of ethics, where it articulates a combination of moral realism and ethical naturalism, whereby consideration of elemental desire involves commitment to the eudaimonistic society. This is then followed by a sublime discussion of key moments in the trajectory of Western philosophy, the tradition of which can now be seen to be based on what the author calls the unholy trinity of the epistemic fallacy or the reduction of being to knowledge, primal squeeze or the collapse of structure and alethic truth, and ontological monovalence.

'...stunning readings of key chapters in the history of philosophy. This is a unique book full of gems.' - Peter Manicas

'In this stunning book, Roy Bhaskar develops his own programme of critical realism into a radically new and original theory of dialectics and a critique of previous theories from the ancient Greeks to twentieth century neo-Marxism. The result is comparable in its scope and ambition to Sartre's critique of dialectical reasoning. It is hard to think of any other contemporary philosopher with the powers to bring this off.' - William Outhwaite

Roy Bhaskar is the originator of the philosophy of critical realism, and the author of many acclaimed and influential works including A Realist Theory of Science, The Possibility of Naturalism, Scientific Realism and Human Emancipation, Reclaiming Reality and Dialectic: The Pulse of Freedom. He is an editor of the recently published Critical Realism: Essential Readings and is currently chair of the Centre for Critical Realism.
Contents Preface Preface to the Second Edition Inroduction Chapter 1. Philosophy and Scientific Realism 1. Two Sides of Knowledge 2. Three Traditions in the Philosophy of Science 3. The Transcendental Analysis of Experience a. The Analysis of Perception b. The Analysis of Experimental Activity 4. The Status of Ontology and Its Dissolution in Classical Philosophy 5. Ontology Vindicated and The Real Basis of Causal Laws 6. A Sketch of a Critique of Empirical Realism Chapter 2. Actualism and the Concept of a Closure 1. Introduction: On the Actuality of the Causal Connection 2. Regularity Determinism and the Quest for a Closure 3. The Classical Paradigm of Action 4. Actualism and Transcendental Realism: The Interpretation of Normic Statements 5. Autonomy and Reduction 6. Explanation in Open Systems Appendix. Orthodox Philosophy of Science and the Implications of Open Systems Chapter 3. the Logic of Scientific Discovery 1. Introduction: On the Contingency of the Causal Connection 2. The Surplus-Element in the Analysis of Law-like Statements: A Critique of the Theory of Models 3. Natural Necessity And Natural Kinds: The Stratification of Nature and The Stratification of Science 4. The Social Production of Knowledge by Means of Knowledge 5. Objections to the Account of Natural Necessity Proposed 6. The Problem of Induction Appendix. Natural Tendencies and Causal Powers Chapter 4. Metaphysics and the Philosophy of Science Postscript to the Second Edition Bibliography Index of Names Index of Subjects
GOR007551787
9780415454919
0415454913
Dialectic: The Pulse of Freedom by Roy Bhaskar
Roy Bhaskar
Classical Texts in Critical Realism Routledge Critical Realism
Used - Very Good
Paperback
Taylor & Francis Ltd
2008-07-01
422
N/A
Book picture is for illustrative purposes only, actual binding, cover or edition may vary.
This is a used book - there is no escaping the fact it has been read by someone else and it will show signs of wear and previous use. Overall we expect it to be in very good condition, but if you are not entirely satisfied please get in touch with us
Trustpilot