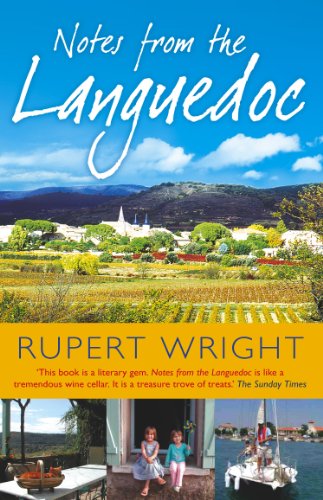 Notes From the Languedoc
by Rupert Wright

In Stock
$31.99
inc. GST
It is easy to get to the Languedoc. You will learn about the Languedoc's troubled and fascinating history, visit bullfights and boar hunts, and hear about the writers and artists that have lived and travelled in this intriguing land.
Very Good Well Read
Only 4 left

Notes From the Languedoc Summary

Notes From the Languedoc by Rupert Wright

It is easy to get to the Languedoc. Follow the Rhone south through France, then once you hit the Mediterranean coast, turn right. The mystery is that for generations, people have been getting to the sea and turning left to Provence. This lack of attention means that the Languedoc is France's last undiscovered Mediterranean secret. Now Rupert Wright introduces you to the region's winemakers, oyster farmers, canal people and celebrated inhabitants, living and dead, including Montpellier's dynamic Mayor, Georges Freche, and local matador Juan Bautista. You will learn about the Languedoc's troubled and fascinating history, visit bullfights and boar hunts, and hear about the writers and artists that have lived and travelled in this intriguing land.

Notes From the Languedoc Reviews

"This book is a literary gem. Notes from the Languedoc is like a tremendous wine cellar. It is a treasure trove of treats. Rupert Wright is a mischievous, bold reporter who has met everyone and tasted everything. This is the best book on the Languedoc. Exquisitely illustrated, this is a book to savour, like a full-throated local Merlot" -- Jonathan Miller * Sunday Times *
"Languedoc is what Provence was until about 70 years ago: the British ideal of the south of France. Rupert Wright's Notes from the Languedoc evokes it so perfectly that the British do not need to leave Britain" -- Frank Johnson * Daily Telegraph *
"All you ever wanted to know about the Languedoc, this book is a cultural, historical and contemporary tour de force" -- Carla McKay * Daily Mail *
"A hilarious read about the wine, people and history of the area ... a story of love, laughter and liquorice allsorts in Languedoc" * The Lady *
"Evocative and intriguing" * Woman & Home *

Rupert Wright has been a journalist for nearly 20 years, reporting from over 40 countries. Now based in France, he contributes to numerous publications, including the Financial Times and The Sunday Times.

GOR001229329
Notes From the Languedoc by Rupert Wright
Rupert Wright
Used - Very Good
Paperback
Ebury Publishing
2005-07-07
288
009190563X
9780091905637
N/A
Book picture is for illustrative purposes only, actual binding, cover or edition may vary.
This is a used book - there is no escaping the fact it has been read by someone else and it will show signs of wear and previous use. Overall we expect it to be in very good condition, but if you are not entirely satisfied please get in touch with us.