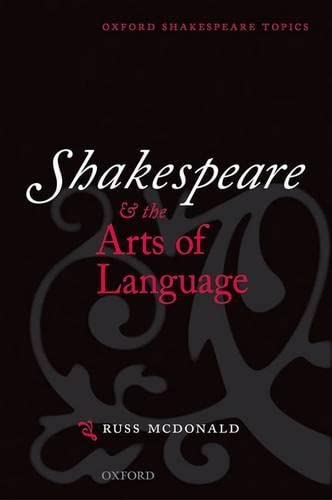 Shakespeare and the Arts of Language
by Russ McDonald

Shakespeare and the Arts of Language Summary

Shakespeare and the Arts of Language by Russ McDonald

Oxford Shakespeare Topics provide students and teachers with short books on important aspects of Shakespeare criticism and scholarship. Each book is written by an authority in its field, and combines accessible style with original discussion of its subject. Notes and a critical guide to further reading equip the interested reader with the means to broaden research. For the modern reader or playgoer, English as Shakespeare used it can seem alien and puzzling: vocabulary and grammar are in transition, pronouns and verb-forms can seem unfamiliar. Moreover, the conventions of poetic drama may also pose an impediment. Shakespeare and the Arts of Language provides a clear and helpful guide to the linguistic and rhetorical dimensions of the plays and poems. Written in a lucid, non-technical style, the book starts with the story of how the English language changed throughout the sixteenth century. Subsequent chapters define Shakespeare's main artistic tools and illustrate their poetic and theatrical contributions: Renaissance rhetoric, imagery and metaphor, blank verse, prose speech, and wordplay. The conclusion surveys Shakespeare's multiple and often conflicting ideas about language, encompassing both his enthusiasm at what words can do for us and his suspicion of what words can do to us. Throughout, Russ McDonald helps his readers to appreciate a play's concerns and theatrical effects by thinking about its language in relation to other writings of the period. He also emphasizes pleasure in the physical properties of Shakespeare's words: their colour, weight, and texture, the appeal of verbal patterns, and the irresistible power of intensified language.

Shakespeare and the Arts of Language Reviews

... offers a comprehensive overview of various aspects of and approaches to language in the plays of Shakespeare ... a useful introduction to figurative language, rhetoric, and wordplay. * Modern Language Review *
Russ McDonald ... offers an initiation into Shakespeare's English ... Like a good musician leading us beyond merely humming the tunes, he helps us hear Shakespearean unclarity, revealing just how expression in late Shakespeare sometimes transcends ordinary verbal meaning ... particularly recommendable. * Ruth Morse, Times Literary Supplement *
Oxford University Press offer a mix of engagingly written introductions to a variety of Topics intended largely for undergraduates. Each author has clearly been reading and listening to the most recent scholarship, but they wear their learning lightly. * Ruth Morse, Times Literary Supplement *

GOR003608495
Shakespeare and the Arts of Language by Russ McDonald
Russ McDonald
Oxford Shakespeare Topics
Used - Very Good
Paperback
Oxford University Press
2001-02-01
222
0198711719
9780198711711
N/A
Book picture is for illustrative purposes only, actual binding, cover or edition may vary.
This is a used book - there is no escaping the fact it has been read by someone else and it will show signs of wear and previous use. Overall we expect it to be in very good condition, but if you are not entirely satisfied please get in touch with us.