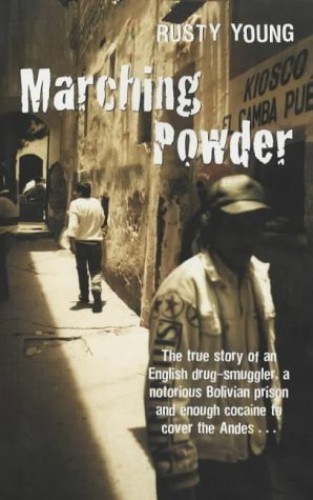 Marching Powder: The Story of an English Drug-Smuggler, A Notorious Bolivian Prison And Enough Cocaine to Cover the Andes... by Rusty Young

MARCHING POWDER is the story of Thomas McFadden, a small-time English drug smuggler who was arrested in Bolivia and thrown inside the notorious San Pedro prison. He found himself in a bizarre world, the prison reflecting all that is wrong with South American society. Prisoners have to pay an entrance fee and buy their own cells (the alternative is to sleep outside and die of exposure), prisoners' wives and children often live inside too, high quality cocaine is manufactured and sold from the prison, and all the police from the governor downwards can be bribed. Under the surface is a frightening level of violence - Thomas's life was often in danger and one of his friends was murdered by the police when he threatened to expose the corruption in the prison.

Thomas McFadden was a minor drugs dealer in Bolivia who was summarily arrested and thrown into jail, the notorious San Pedro Prison. Within the grim walls of the corrupt institution, he discovered a world which mirrored many of the wrongs of South American society at large: bribery, drugs, intimidation and violence at every level. McFadden needed to raise $5,000 to get released and how he managed this - for instance, by giving backpackers tours of the prison - is much of the story. Inevitably, Marching Powder recalls the nightmarish world of Midnight Express, but is sufficiently different in its own right to remain compelling. Young's account was written partly during a three-month stay with the unfortunate McFadden and reeks of authenticity. Not for the faint-hearted, perhaps, but those who enjoyed Killing Pablo may see this often surreal history as some sort of follow- up and it should do well.

Rusty Young is an Autralian lawyer who met Thomas McFadden on a tour of San Pedro prison in La Paz. He was so impressed by him that he stayed there (voluntarily) for three months in order to write his story. Thomas McFadden is now a free man, teaching English in Colombia.

GOR001117734
Marching Powder: The Story of an English Drug-Smuggler, A Notorious Bolivian Prison And Enough Cocaine to Cover the Andes... by Rusty Young
Rusty Young
Used - Very Good
Paperback
Pan Macmillan
2003-08-01
320
028307373X
9780283073731
N/A
Book picture is for illustrative purposes only, actual binding, cover or edition may vary.
This is a used book - there is no escaping the fact it has been read by someone else and it will show signs of wear and previous use. Overall we expect it to be in very good condition, but if you are not entirely satisfied please get in touch with us.