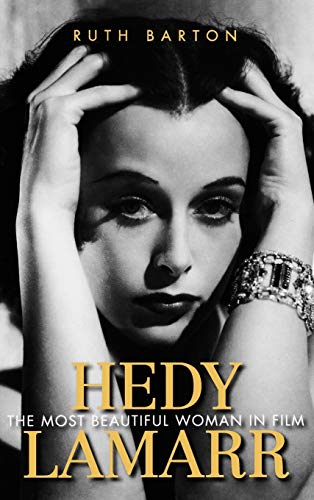 In Hedy Lamarr: The Most Beautiful Woman in Film, Ruth Barton explores the many facets of the screen legend, including her life as an inventor.

Hedy Lamarr: The Most Beautiful Woman in Film by Ruth Barton

Hedy Lamarr's life was punctuated by salacious rumors and public scandal, but it was her stunning looks and classic Hollywood glamour that continuously captivated audiences. Born Hedwig Kiesler, she escaped an unhappy marriage with arms dealer Fritz Mandl in Austria to try her luck in Hollywood, where her striking appearance made her a screen legend. Her notorious nude role in the erotic Czech film Ecstasy (1933), as well as her work with Cecil B. DeMille ( Samson and Delilah, 1949), Walter Wanger ( Algiers, 1938), and studio executive Louis B. Mayer catapulted her alluring and provocative reputation as a high-profile sex symbol. In Hedy Lamarr: The Most Beautiful Woman in Film, Ruth Barton explores the many facets of the screen legend, including her life as an inventor. Working with avant-garde composer and film scorer George Antheil, Lamarr helped to develop and patent spread spectrum technology, which is still used in mobile phone communication. However, despite her screen persona and scientific success, Lamarr's personal life caused quite a scandal. A string of failed marriages, a lawsuit against her publisher regarding her sensational autobiography, and shoplifting charges made her infamous beyond her celebrity. Drawing on extensive research into both the recorded truths of Lamarr's life and the rumors that made her notorious, Barton recognizes Lamarr's contributions to both film and technology while revealing the controversial and conflicted woman underneath. Hedy Lamarr: The Most Beautiful Woman in Film illuminates the life of a classic Hollywood icon.

""A well-written, interesting biography...the author has great insight into the life of the great star as well as the film industry at the time of her fame."-- Book Bargains and Previews" --

""An early scandalous sexpot, Lamarr married six times and was convicted of shoplifting, but her glamour made her one of Hollywood's hottest celebrities in the 1930s-40s."-- LA Magazine" --

""Barton's biography details the rapid career rise of a young woman who was fortunate to be in the right places at the right time."-- EDGE Atlanta" --

""Barton's well-written biography is appropriate for public libraries and will appeal to anyone interested in European cinema, women in science and the psychological effects of stardom."-- Library Journal" --

""Carefully researched and zippily written, the book is the definitive companion to Lamarr's films." --London Review of Books" --

""Fact or fiction, this intriguing biography has again shown us why the light shone so brightly on the beautiful face of Hedy Lamarr, the most beautiful girl in the worl." -- Studies in American Culture" --

""The life of Hedy Lamarr, one of Hollywood's most beautiful faces, was dogged by controversy and condescension throughout her film career. Ruth Barton's definitive, highly-readable biography, however, finally gives the actress her dues."-- Sunday Business Post" --

""To learn more about the truths as well as the rumors surrounding Hedy's legendary presence, the new book... Hedy Lamarr: The Most Beautiful Women in Film... reveals the star's life in Europe and Hollywood and her surprising contributions to technology." --Irv Slifkin" --

"Barton acknowledges the power of Lamarr's image - and concedes that her lasting appeal is not as a female Thomas Edison. She sees Lamarr's wasted potential, accurately portraying her as a difficult but intelligent woman who understood how much her beauty restricted her." -- Jeanine Basinger, Wall Street Journal

"Barton's attempt to illuminate this most mercurial of movie stars is a fascinating read-intriguing, tender, wise, and impeccably researched throughout. The result is a real page-turner. Now, here is a book that would make a great movie." -- London Daily Mail

"Lamarr was a complicated woman, deserving of a more serious appraisal than the numerous tabloid accounts that till now have stood as the public record.... Barton... introduces interesting ancillary cultural referents, including tributes to Lamarr from admirers like Henry Miller and Joseph Cornell, and takes a more analytical, feminist approach." -- New York Times

"The film world has been waiting for a thorough, reliable book on Hedy Lamarr, covering or uncovering everything from nudity to radar. Well, this is it, the best book on the strange lady we are likely to have." -- David Thomson, author of The New Biographical Dictionary of Film

"Well-written and well-researched, this book should be the definitive Hedy Lamarr biography for quite some time. Barton reveals a highly intelligent and emotionally complex woman behind the star image." -- Jan-Christopher Horak, author of Lovers of Cinema: The First American Film Avant-Garde, 1919--1945

Ruth Barton is associate professor of history at the University of Auckland.
GOR002886421
9780813126043
0813126045
Hedy Lamarr: The Most Beautiful Woman in Film by Ruth Barton
Ruth Barton
Screen Classics
Used - Very Good
Hardback
The University Press of Kentucky
2010-06-07
312
N/A
Book picture is for illustrative purposes only, actual binding, cover or edition may vary.
This is a used book - there is no escaping the fact it has been read by someone else and it will show signs of wear and previous use. Overall we expect it to be in very good condition, but if you are not entirely satisfied please get in touch with us
Trustpilot