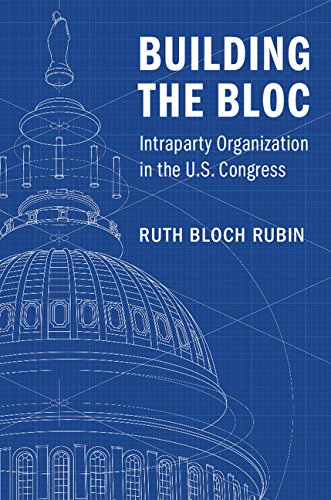 Building the Bloc by Ruth Bloch Rubin (University of Chicago)

Building the Bloc offers a new theory of how organized groups of dissident lawmakers - such as the Blue Dog Coalition and House Freedom Caucus - drive congressional development and structure lawmaking. Spanning more than a century of history, it sheds new light on a number of decisive congressional conflicts and compromises.

Building the Bloc: Intraparty Organization in the US Congress by Ruth Bloch Rubin (University of Chicago)

Traversing more than a century of American history, this book advances a new theory of congressional organization to explain why and how party dissidents rely on institutions of their own making, arguing that these intraparty organizations can radically shift the balance of power between party leaders and rank-and-file members. Intraparty organizations empower legislators of varying ideological stripes to achieve collective and coordinated action by providing selective incentives to cooperative members, transforming public-good policies into excludable accomplishments, and helping members to institute rules and procedures to promote group decision making. Drawing on rich archival evidence and interview data, the book details the challenges dissident lawmakers encounter when they face off against party leaders and their efforts to organize in response. Eight case studies complicate our understanding of landmark fights over rules reform, early twentieth-century economic struggles, mid-century battles over civil rights legislation, and contemporary debates over national health care and fiscal policy.
'Congressionalists and scholars of American political development will hail this deeply researched study as a scholarly landmark. Writing confidently and vividly, Bloch Rubin demonstrates that, over time, the construction and maintenance of minoritarian blocs - in both houses - have fundamentally shaped the course of American history. Reading her path-breaking book will change how you think about Congress and its politically constitutive role in our regime.' Richard M. Valelly, Swarthmore College, Pennsylvania
'The emergence of an organized party faction in Congress often produces spectacular moments of high gamesmanship in which political careers are determined for better or worse. Behind those intra-party games is the painstaking labor of dedicated dissenters who create and manage those organized factions. Through her own painstaking research, Ruth Bloch Rubin has uncovered and analyzed their history, providing us with both a much deeper understanding of the genesis of political institutions and an illustration of how the eruption of factions has shaped and will continue to shape the trajectory of American politics.' Richard Bensel, Cornell University
'With analytical verve, historical depth, and empirical richness, this wonderful book illuminates the origins, character, and effects of organizations within parties on political representation in our national legislature. By deploying an institutional imagination with an eye for what matters, Building the Bloc compellingly shows how the persistence of these structures has shaped the character of legislative content and productivity, and sheds fresh light on key debates about parties, pivots, and preferences.' Ira Katznelson, Columbia University
'This deeply researched book offers a fresh perspective on congressional organization and policymaking. Ruth Bloch Rubin traces the development of the progressive Republicans of the early twentieth century, the Southern Bloc of the mid twentieth century, the Democratic Study Group of the 1960s and 1970s, as well as the Blue Dogs, the Republican Study Committee, and the Freedom Caucus of recent decades. In the process, she illustrates how intraparty organization empowers pivotal actors who drive policymaking and Congress's institutional development.' Frances E. Lee, University of Maryland
Ruth Bloch Rubin is Assistant Professor of Political Science at the University of Chicago. She received her PhD from the University of California, Berkeley and was previously a Robert Wood Johnson Scholar in Health Policy Research at Harvard University, Massachusetts.
1. Intraparty organization in the US Congress; 2. Procedural revolt and the House insurgency, 1908-10; 3. The Senate insurgency's quest for economic reform, 1909-10; 4. Securing southern solidarity, 1937-56; 5. The decline of southern influence, 1957-64; 6. Making the moderates matter, 1994-2010; 7. Coordinating liberal hardliners, 1957-94; 8. Organizing conservative revolutionaries, 1970-2015; 9. Rethinking the mischiefs of faction.
NGR9781316649923
9781316649923
131664992X
Building the Bloc: Intraparty Organization in the US Congress by Ruth Bloch Rubin (University of Chicago)
Ruth Bloch Rubin (University of Chicago)
New
Paperback
Cambridge University Press
2017-08-11
332
N/A
Book picture is for illustrative purposes only, actual binding, cover or edition may vary.
This is a new book - be the first to read this copy. With untouched pages and a perfect binding, your brand new copy is ready to be opened for the first time
Trustpilot