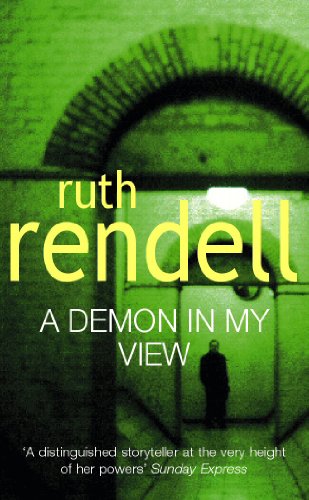 A Demon In My View
by Ruth Rendell

In Stock
$11.99
inc. GST
Arthur Johnson doesn't look like a murderous psychopath; Locked in the cellar of his building is the perfect willing victim, a woman who can be murdered over and over again, a woman who waits for Arthur every night...
Very Good Good
5 in stock

A Demon In My View Summary

A Demon In My View by Ruth Rendell

Arthur Johnson doesn't look like a murderous psychopath; he is a mild-mannered man who has never known how to talk to women. Years of loneliness has warped his mind, turning his desire for a woman's love and respect into a pathological need for carefully controlled violence. Locked in the cellar of his building is the perfect willing victim, a woman who can be murdered over and over again, a woman who waits for Arthur every night... When a young scholar of psychopathic personalities moves in downstairs and Arthur's mannequin disappears, where will he turn to satisfy his urgent craving for violence? The crime novel that won Rendell the first of her six Gold Dagger awards, this is a haunting insight into the mind of a pathological criminal.

A Demon In My View Reviews

"As well as being a classic of suspense, this book marks the high point of Rendell's gift for seeing the comedy in tragedy. Her portrayal of the pompous and pious bachelor Arthur Johnson and his struggles to control his regrettable inclination towards serial murder is as hilarious as it is disturbing." -- Jake Kerridge * Telegraph *
"Wonderful at exploring the dark corners of the human mind, and the way private fantasies can clash and explode into terrifying violence" * Daily Mail *
"The best mystery writer anywhere in the English-speaking world" * Boston Globe *
"Rendell is unrivalled at depicting psychologically warped people and at creating unease through the simplest things. This is another triumph" * Observer *

GOR001496432
A Demon In My View by Ruth Rendell
Ruth Rendell
Used - Very Good
Paperback
Cornerstone
1977-05-16
224
0099148609
9780099148609
Winner of CWA Gold Dagger for Fiction 1976
Book picture is for illustrative purposes only, actual binding, cover or edition may vary.
This is a used book - there is no escaping the fact it has been read by someone else and it will show signs of wear and previous use. Overall we expect it to be in very good condition, but if you are not entirely satisfied please get in touch with us.