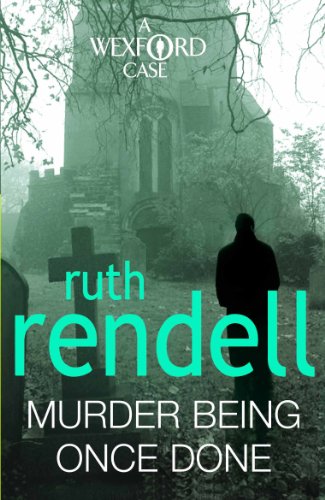 Murder Being Once Done
by Ruth Rendell

In Stock
$12.49
+10% GST
The seventh book to feature the classic crime-solving detective, Chief Inspector Wexford. But then he discovers that his nephew Howard is heading the investigation into the macabre murder of Loveday Morgan, whose body was found abandoned in Kenbourne Cemetery.
Very Good Good Well Read
5 in stock

Murder Being Once Done Summary

Murder Being Once Done: (A Wexford Case) by Ruth Rendell

The seventh book to feature the classic crime-solving detective, Chief Inspector Wexford. It seems fitting that the final resting place of a girl's body should be in a graveyard. But this is no peaceful burial. This is a brutal murder scene. Under strict orders from his doctor to indulge in no criminal investigation, Wexford is sent to London for a break away from the pressures of the Kingsmarkham police force. But then he discovers that his nephew Howard is heading the investigation into the macabre murder of Loveday Morgan, whose body was found abandoned in Kenbourne Cemetery. Despite opposition from Howard and his team, Wexford is drawn to the case. And when he unearths Loveday's connection to a religious cult whose leader was imprisoned for sexual absue, he relentlessly pursues this sinister new lead...

Murder Being Once Done Reviews

"One of the best novelists writing today" * P.D. James *
"The most brilliant mystery novelist of our time" * Patricia Cornwell *
"Probably the greatest living crime writer in the world" * Ian Rankin *
"[Wexford] has become an old friend who gets better with age" * Herald *
"Rendell has quite simply transformed the genre of crime writing. She displays her peerless skill in blending the mundane, commonplace aspects of life with the potent murky impulses of desire and greed, obsession and fear" * Sunday Times *

GOR001941812
Murder Being Once Done: (A Wexford Case) by Ruth Rendell
Ruth Rendell
Wexford
Used - Very Good
Paperback
Cornerstone
2010-02-04
272
009953486X
9780099534860
N/A
Book picture is for illustrative purposes only, actual binding, cover or edition may vary.
This is a used book - there is no escaping the fact it has been read by someone else and it will show signs of wear and previous use. Overall we expect it to be in very good condition, but if you are not entirely satisfied please get in touch with us.