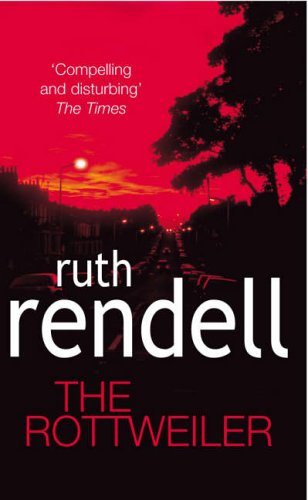 The Rottweiler
by Ruth Rendell

In Stock
$11.49
+10% GST
The latest body was discovered very near Inez Ferry's antique shop in Marylebone. Trinkets very similar to those mysteriously appearing in Inez's shop. As her collection of antique trinkets grows, so does Inez's fear that she is harbouring a psychopathic murderer.
Very Good Good
7 in stock

The Rottweiler by Ruth Rendell

The first murder victim had a bite mark on her neck. When the tabloids got hold of the story, they immediately called the deranged killer 'The Rottweiler', and the name stuck. The latest body was discovered very near Inez Ferry's antique shop in Marylebone. Someone spotted a shadowy figure running away past the station, but couldn't say for sure if it was a man or a woman. There were only two other clues. The murderer seemed to have a preference for strangling his victims and then removing something personal - like a cigarette lighter or a necklace. Trinkets very similar to those mysteriously appearing in Inez's shop. . . Since her actor husband died, too early into their marriage, Inez supplemented her modest income by taking in tenants above the shop. As her collection of antique trinkets grows, so does Inez's fear that she is harbouring a psychopathic murderer.

"Compelling and disturbing" * The Times *
"In Rendell's expert hands, you'll want to keep reading until dawn - with the light on" * Red *
"Rendell skilfully crafts her characters and they breathe feverishly through her imagination" * The Times *
"Wonderful at exploring the dark corners of the human mind, and the way private fantasies can clash and explode into terrifying violence" * Daily Mail *
"Rendell is unrivalled at depicting psychologically warped people and at creating unease through the simplest things. This is another triumph" * Observer *

GOR002007349
The Rottweiler by Ruth Rendell
Ruth Rendell
Used - Very Good
Paperback
Cornerstone
2004-04-24
416
0099460246
9780099460244
N/A
Book picture is for illustrative purposes only, actual binding, cover or edition may vary.
This is a used book - there is no escaping the fact it has been read by someone else and it will show signs of wear and previous use. Overall we expect it to be in very good condition, but if you are not entirely satisfied please get in touch with us.