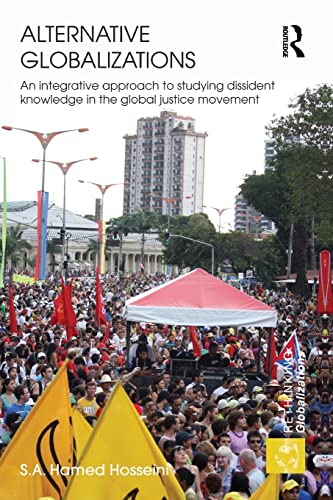 Are the growing oppositions to neoliberal market globalism (especially in the aftermath of global economic meltdown) able to develop meaningful alternative ideologies? Is there any substantial alternative to the world capitalist system on the horizon? How would the ideologies and ideas address the dire dilemmas of economy vs. ecology, redistribution vs. recognition, global vs. local, reform vs. revolution etc.?

This book answers such important questions by examining the intellectual structure of the so-called `anti-globalization' or `global justice' movement. It explores the formation and transformation of ideas, identities, and solidarities in the movement. The book also develops an analytical model to explain the movement's ideational novelties and continuities in terms of both activist social experiences and global social changes.

Hosseini develops new sociological concepts, integrates opposing theoretical perspectives into one approach, and addresses the gap between critical theories and activist practices. Through this endeavor, he discovers an emerging mode of consciousness which is characterized by its cross-identity and cross-ideological nature. This is a live but quiet global revolution.

Drawing on a variety of disciplines, this gourd-breaking volume will be of interest to students and scholars of global studies, political sciences, sociology and social movement studies.

Dr. S. A. Hamed Hosseini is an Assistant Professor of Sociology in the Faculty of Education and Arts, and an Associated Researcher at The Australian Institute for Social Inclusion and Wellbeing at the University of Newcastle, Australia. He completed his PhD in Global Studies (2006) at the Australian National University (ANU). He has conducted research on transnational social movements, global social change, globalist ideologies, Islamism, and transnational identities. Since 2003, he has been teaching at the Australian National University, University of Technology Sydney, University of New South Wales, and the University of Newcastle, in the areas of Global Health, Global Welfare, Global Social Change, Globalization, Research Methods, Environmental Sociology, Religion and Politics. He has published articles and presented conference papers on Global Justice (2009), Sociology of Dissident Knowledge (2007), Transnational Solidarities (2006), Sociology of Collective Cognition (2003), Rural and Regional Development in Iran (1999, 2000), Sociology of Conservatism, and New Conservatism in the Context of Iran (2000), Ali Shariati's Critical School of Thought (2000), and the Applicability of Social Theories in the Context of Iran (1999).

GOR009690886
Alternative Globalizations: An Integrative Approach to Studying Dissident Knowledge in the Global Justice Movement by S.A. Hamed Hosseini (University of Newcastle, Australia)
S.A. Hamed Hosseini (University of Newcastle, Australia)
Rethinking Globalizations
Used - Very Good
Paperback
Taylor & Francis Ltd
2011-10-07
288
041550242X
9780415502429
N/A
Book picture is for illustrative purposes only, actual binding, cover or edition may vary.
This is a used book - there is no escaping the fact it has been read by someone else and it will show signs of wear and previous use. Overall we expect it to be in very good condition, but if you are not entirely satisfied please get in touch with us.