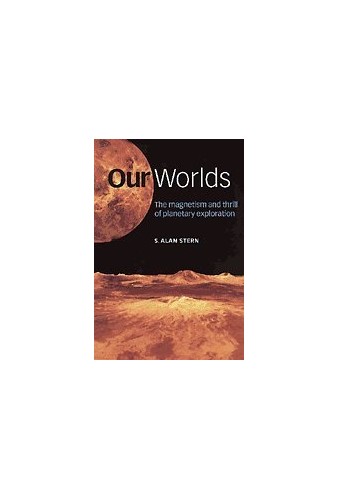 In Stock
21,99 $
inc. GST
Planetary scientists explain what we know about their favorite worlds. In this voyage of exploration you meet Mars, Venus, and the Moon, take a trip with Comet Halley, visit the moons Io, Titan, and Triton, and see asteroids close up.
Good
Only 1 left

What have Apollo, Voyager, Magellan and Galileo told us about the solar system? In Our Worlds, eight planetary scientists explain what we know about their favourite world and why they find it fascinating to explore with space age techniques. Writing from a personal point of view, the distinguished researchers give a unique insight into planetary science during today's golden age of discovery. With passion and punch, the authors describe the most enticing discoveries about their subject. In this voyage of exploration you meet Mars, Venus, and the Moon, take a trip with Comet Halley, visit the moons Io, Titan, and Triton, and see asteroids close up. This is an insider's perspective written for a general readership by scientists at the cutting edge.

'In Our Worlds, eight distinguished scientists specialising in the Solar System have bared all, finally letting us in on what it's really like to grapple with space. Each of the authors has a deep, career-long passion for a single class of celestial object - and it shows. Edited by Alan Stern, Our Worlds not only abounds with details about volcanoes on Io, seas on Titan, asteroid impacts, Martian life, Venusian craters, lunar spectroscopy, cometary nuclei and chaotic orbits, but also tells a gripping story of one of the wonders of our age: the transition of planets from fuzzy, indistinct, telescopic objects into the new worlds revealed by the expensive technological ingenuity of passing and orbiting spacecraft.' David Hughes, New Scientist
' ... important text, which manages to be both erudite and highly readable.' David Hughes, New Scientist
'Our Worlds is an eminently readable book.' Modern Astronomer
'The most attractive feature of Our Worlds is that each author is obviously a genuine enthusiast. Moreover, there are personal touches not to be found in conventional books. Alan Stern has proved to be an expert editor, and the illustrations are excellent, particularly the colour section. Our Worlds is a book not to be missed by anyone who has even a massing interest in our neighbour worlds.' Patrick Moore, The Times Higher Education Supplement
'This is a book likely to provide insight and inspiration to young people who may be on the point of making career choices ... in 20 years time I look forward to hearing of someone for whom this book was a starting point.' Margaret Penston, The Observatory
' ... the essays in this book manage to be informative, fascinating and often exciting.' Brian McMahon, Astronomy & Space
'... the essays in this book manage to be informative, fascinating and often exciting.' Brian McMahon, Astronomy & Space
"...highlights the human story of planetary science...presents the life stories of nine planetary scientists...their research, their lives, and how they got involved in what they're doing." Astronomy
"...superb." Science Books & Films
"An unexpected plus is how much cutting-edge science gets conveyed so well in so few pages...anyone who has struggled to understand concepts like mineral spectroscopy, orbital dynamics, and cratering rates will appreciate how easily they can be grasped when presented with a little care..." Sky & Telescope
"The contributors write with varying degrees of formality, humor, and self-revelation, but all convey their enthusiasm for the celestial worlds they study as well as the world of professional astronomy. Recommended for public and academic libraries." Library Journal

GOR003750755
Our Worlds: The Magnetism and Thrill of Planetary Exploration by S. Alan Stern (Southwest Research Institute, Boulder, Colorado)
S. Alan Stern (Southwest Research Institute, Boulder, Colorado)
Used - Good
Paperback
Cambridge University Press
1999-02-11
184
0521644402
9780521644402
N/A
Book picture is for illustrative purposes only, actual binding, cover or edition may vary.
This is a used book - there is no escaping the fact it has been read by someone else and it will show signs of wear and previous use. Overall we expect it to be in very good condition, but if you are not entirely satisfied please get in touch with us.