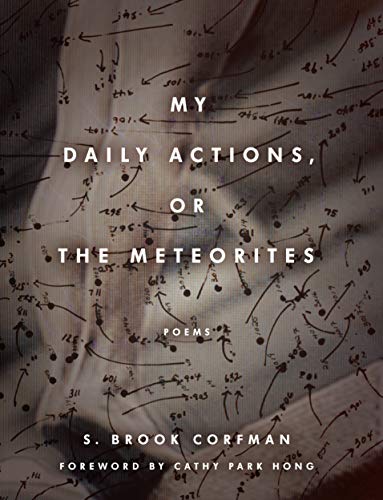 My Daily Actions, or The Meteorites by S. Brook Corfman

My Daily Actions, or The Meteorites by S. Brook Corfman

NAMED THE BEST POETRY OF 2020 BY THE NEW YORK TIMES
My Daily Actions, or The Meteorites is the result of a daily investigative writing practice, in which I was worried that a poem invested in the particulars of my life would be uninteresting-that the "ordinary" would be mundane. Instead memory, dreams, and the associative power of the imagination filled each moment with meaning, each tv show I watched or friend I spoke with, each outfit I wore or nail polish color I chose. In these poems, a combination of dread (for something approaching) and anxiety (for what might be approaching but isn't yet known) undid a sense of the present separate from climate change, global racial capitalism, whiteness, and gender-based violence, especially as I wrote as I tried to find out how my own gender fit into the world. The prose poem is the vehicle by which a recording practice ("journaling") meets the associative power of the poem.

S. Brook Corfman's My Daily Actions, or The Meteorites is one of the most distinctive poetic journals I've read in that it expanded my already quite 'out there' ideas of the ordinary. Welcome to the incredibly true life of poets. Often, being attuned to the everyday means we are also riddled with premonition. Whenever two things interact with each other, they exert forces upon each other. That's Newton. Here, Corfman finds a liberating universe in areas of fleeting contact. 'To restore old books, the paper can be split in half and reattached with a new archival center . . .'. The dangers to our lives (rigid thinking turned into law, ecological disaster) are seen as both modern and ancient. Let Corfman be the poet in your ear offering a little magic to thrive. -- Stacy Szymaszek
'To move on and through a feeling,' writes S. Brook Corfman, 'a feeling must be honored.' These poems survive the fraught journey from the inner and outermost spaces and leave their permanent marks. Like the still photographs of Cassils's Becoming an Image, each poem offers a new view of the pained Earth, the uncertain self, and the meteoric woman. When '[a] woman died and we cannot even agree she was a woman,' not even the weather can be relied upon. These poems are stark and tender compressions that artfully and achingly reckon with what is imminent, what is private, and what is unknown. -- Yona Harvey, author of Hemming the Water and You Don't Have to Go to Mars for Love
'There's a kind of suspension in a car on a highway, so that to stop feels a great affront.' This line, from near the end of S. Brook Corfman's new book, describes the poet's own power to 'gather the propulsive forces' that carry us through worlds lived, felt, and dreamt. From these, the subject emerges as an energy, a force seen in its passing: 'I, the death wail of each passing car; I, a late night but still somehow bright sky.' This is subjectivity in motion, a self in transformation, through emotion's mutable ground. -- Jessica Fisher, author of Frail-Craft and Inmost
Generated from a daily writing practice, these poems highlight ordinary moments, weighing gender, violence, and capitalism in the process, with a foreword by Cathy Park Hong. * Publishers Weekly *
Poems of fear and foreboding that live with the knowledge of climate crisis, without resorting to self-righteousness or self-flagellation. The form is mostly prose blocks, built of elusive, mysteriously fascinating sentences that often hinge on apparent contradiction, the simultaneity of seemingly opposite states: 'Even if Tuxedo Mask kissed me back to life, all Endymion, I think I would stay dead.' 'I am a bad imitator and yet this is a good imitation.' 'It is hard to talk about. And yet I have filled a notebook.'"---Elisa Gabbert, The New York Times
The structure of Corfman's poems shines here, as many of the selections in My Daily Actions come in neat, tidy block of text as if trying to literally box in and contain the disorder and confusion with which the author is grappling. * Pittsburgh City Paper *
S. Brook Corfman is the author of Luxury, Blue Lace, chosen by Richard Siken for the 2018 Autumn House Rising Writer Prize, and two chapbooks, including The Anima: Four Closet Dramas (Gauss PDF, 2019). Born and raised in Chicago, they now live in Pittsburgh.

NGR9780823289493
9780823289493
0823289494
My Daily Actions, or The Meteorites by S. Brook Corfman
S. Brook Corfman
Poets Out Loud
New
Paperback
Fordham University Press
2020-09-01
88
Short-listed for Publishing Triangle Awards 2021
Book picture is for illustrative purposes only, actual binding, cover or edition may vary.
This is a new book - be the first to read this copy. With untouched pages and a perfect binding, your brand new copy is ready to be opened for the first time
Trustpilot