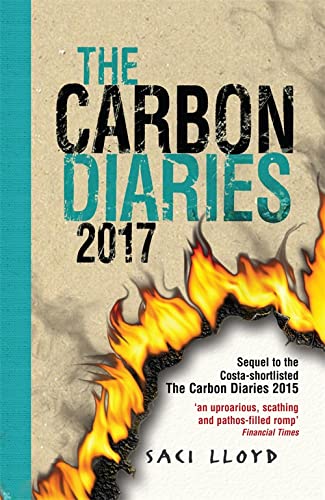 The Carbon Diaries 2017
by Saci Lloyd

In Stock
$11.49
+10% GST
The eagerly awaited sequel to 'Carbon Diaries 2015', which was shortlisted for the Costa Children's Book Award.
Very Good
Only 2 left

It's over a year since her last diary and Laura Brown is now in her first year of university in London, a city still struggling to pull itself together in the new rationing era. Laura's right in the heart of it; her band, the dirty angels, are gigging all over town until a police crackdown on rioting students forces them out of the city. After a brief exile on her parents' farm, the angels set off in a battered VW bus on a tour of Europe with the fabulous Tiny Chainsaws in the Distance.

The tour soon unravels, however, in an increasingly dramatic sequence of events that include drought in Europe and Africa, a tidal-wave of desperate immigrants, a water war in the Middle East and a city-wide face off with the army in London. Not to mention infidelity, betrayal, friendship, love and massive courage.

How long can Laura distance herself from the struggle? And more importantly, how can she keep her style and hope alive in a world on the edge of madness?

A great politically aware story packed with friendship, action and serious food for thought with a brilliantly original voice.Highly recommended. * Book Fest Guide *
Her work has a deftness and authenticity it is difficult not to admire and celebrate. She also deals with matters that need attention and debate which makes this novel and its predecessor a must for every secondary school library * School Librarian *
Lloyd captures the voice perfectly -- edgy, witty, clever, heartfelt ...She creates a dynamic cocktail that grabs up her readers and takes them, wild-eyed, along for the ride * Books For Keeps *
The shaprness of Laura's observations and her essential good humour ... enable a bridge to be built successfully between the weighty and the apparently trivial * Irish Times *
A brilliant and original voice and a politically aware story packed with angst, friendship, betrayal, action, environmental issues and serious food for thought. Highly recommended * INIS *
I absolutely loved Saci Lloyd's first book about Laura and I love this one even more * The Bookbag *

Praise for Carbon Diaries 2015:
'Everyone who cares about the future of the planet should read this book!'

Before becoming an internationally-acclaimed author and activist, Saci has held down a bewildering variety of non-jobs, including being a storyboard artist, a cartoonist, a singer in a band, an animator and a script editor for Camouflage Films. She recently stepped down as Head of Media at NewVIc, but continues her association with the East London college. Saci's first novel, The Carbon Diaries 2015, was shortlisted for the Costa Book Award and her third book, Momentum, was shortlisted for the Guardian Children's Fiction Prize. Momentum is currently in development with Revelation Pictures. Visit her website at www.sacilloyd.com.

GOR001982017
The Carbon Diaries 2017: Book 2 by Saci Lloyd
Saci Lloyd
Used - Very Good
Paperback
Hachette Children's Group
2009-09-28
416
0340970162
9780340970164
N/A
Book picture is for illustrative purposes only, actual binding, cover or edition may vary.
This is a used book - there is no escaping the fact it has been read by someone else and it will show signs of wear and previous use. Overall we expect it to be in very good condition, but if you are not entirely satisfied please get in touch with us.