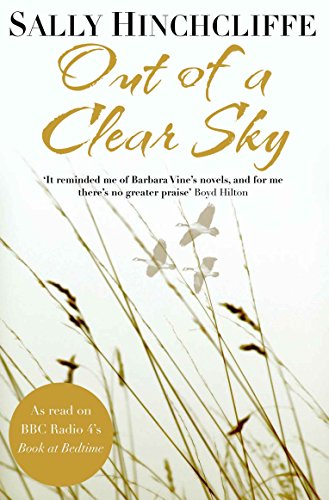 Out of a Clear Sky
by Sally Hinchcliffe

In Stock
$9.99
+10% GST
A chilling debut novel of obsession, loss and birds, reminiscent of Nicci French and Barbara Vine
Very Good
Only 2 left

Out of a Clear Sky Summary

Out of a Clear Sky by Sally Hinchcliffe

People talk about the cold, hard light of day. There's no escaping what you can see by it. There can be no confusing, in that early morning light, the truth with the wished-for reality of dreams. The body was still there. He was still dead.

Abandoned by her lover, Manda finds solace in bird-watching, a hobby her ex-partner introduced her to. The birds provide Manda with an escape from her troubled past - and an uncertain future. But then she falls prey to the ever more sinister attentions of another birdwatcher. As the harassment builds up, she is forced to flee, and details of her complicated past start to emerge.

Haunted by her tenuous relationship with her family and memories of her African childhood, Manda is struggling with the choice between safety and freedom as she tries to escape her elusive stalker. Tempted by the promise of her friend Tom's protection, she wonders if she should finally trust someone before it's too late . . .

Told through the vivid images of birds, Out of a Clear Sky is an unsettling psychological thriller which will grip you until the startling, unforeseen end.

Sally Hinchcliffe is in her thirties, and having graduated from Oxford with a First in PPE, has spent the last ten years working at the Royal Botanic Gardens in Kew. Having completed the MA in Creative Writing at Birkbeck in 2004, she has also had various short stories published. Out of a Clear Sky is her first novel.

GOR002631200
Out of a Clear Sky by Sally Hinchcliffe
Sally Hinchcliffe
Used - Very Good
Paperback
Pan Macmillan
2009-02-06
304
0330453211
9780330453219
Long-listed for Waverton Good Read Award 2008 (UK)
Book picture is for illustrative purposes only, actual binding, cover or edition may vary.
This is a used book - there is no escaping the fact it has been read by someone else and it will show signs of wear and previous use. Overall we expect it to be in very good condition, but if you are not entirely satisfied please get in touch with us.