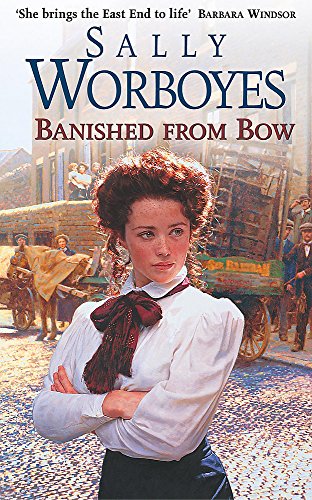 Banished from Bow
by Sally Worboyes

In Stock
$10.49
+10% GST
A compellingly chilling historical saga from the author of WHITECHAPEL MARY and OVER BETHNAL GREEN.
Very Good
Only 2 left

Banished from Bow by Sally Worboyes

Abandoned as a child in 19th-century London's East End, Harriet was taken in by Mary Dean and brought up as a sister to Mary and her brother Arthur. But 17 years later, Harriet and Arthur have fallen in love, and when Harriet then falls pregnant, they are driven out of Bow by prejudiced neighbours.

Arthur is then caught pilfering and faces a prison sentence. However this is soon to be the least of their worries. Harriet has kept a diary she stole as a child - the diary of a midwife - and perpetrator of the Jack the Ripper murders. And now the midwife has returned to the East End in search of Harriet and her diary - and will stop at nothing to get it back. . .

She brings the East End to life * Barbara Windsor *
An excellent book combining humour and passion * Telegraph & Argus *
Here is a vivid evocation of a way of life * East Anglian Daily Times *
Unbridled passions run riot * Daily Mail *
Sizzles with passion * Guardian *
A ripping yarn * Bury Free Press *
It's a rich, vivid, three-dimensional, gutsy and sexy narrative which has you turning the pages into the early hours * Eastern Daily Press *

Sally Worboyes was born and grew up in Stepney with four brothers and a sister. She now lives in Norfolk with her husband and three children. She has written several plays broadcast on Radio Four, and has adapted her own play and novel, WILD HOPS, as a musical, THE HOP-PICKERS. Already an established writer, Sally Worboyes continues her brilliant East End sagas to which she brings some of the raw history of her own family background.

GOR002648933
Banished from Bow by Sally Worboyes
Sally Worboyes
Used - Very Good
Paperback
Hodder & Stoughton General Division
2003-03-03
352
0340824484
9780340824481
N/A
Book picture is for illustrative purposes only, actual binding, cover or edition may vary.
This is a used book - there is no escaping the fact it has been read by someone else and it will show signs of wear and previous use. Overall we expect it to be in very good condition, but if you are not entirely satisfied please get in touch with us.