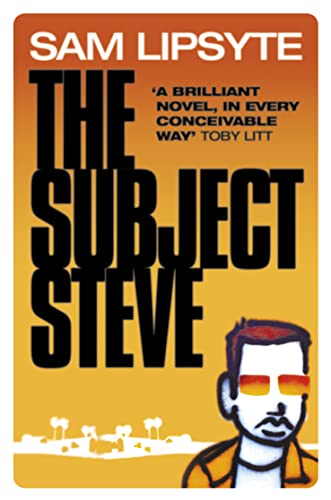 The Subject Steve
by Sam Lipsyte

Dark, dazzling American satire from the natural heir to George Saunders or David Sedaris. `A brilliant novel, in every conceivable way.' Toby Litt

The Subject Steve by Sam Lipsyte

Dark, dazzling American satire from the natural heir to George Saunders or David Sedaris. `A brilliant novel, in every conceivable way.' Toby Litt

Steve's fettle is absolutely fine, but nevertheless, he's dying - of a mystery disease that just might be boredom. At least, that's what the guys in the white coats say. They're not doctors, they're just guys in white coats, and the subject's name isn't Steve, either, but we'll get to that...

`Sam Lipsyte is a gifted stylist, precise, original, devious, and very funny. In a time when the language of most novels is dead on arrival, this book, about a dying man, is startlingly alive.' Jeffrey Eugenides, author of `Middlesex' and `The Virgin Suicides'

`An all-American tale made up of smart deliveries and cracking ideas...reminiscent of Douglas Coupland or "A Heartbreaking Work of Staggering Genius".' Observer

`I laughed out loud - and I never laugh out loud...' Chuck Palahniuk, author of `Fight Club'

`The best thing since George Saunders last broke cover...Kind of Beckett meets "Six Feet Under", comedy doesn't come much blacker than this.' Uncut

Sam Lipsyte is the author of `Venus Drive', a collection of short stories, and two novels, `The Subject Steve' and `Home Land'. His work has appeared in the New York Times and the Quarterly. He was born in 1968, and got married in 2003.

GOR001649028
The Subject Steve by Sam Lipsyte
Sam Lipsyte
Used - Very Good
Paperback
HarperCollins Publishers
2003-03-03
256
0007133669
9780007133666
N/A
Book picture is for illustrative purposes only, actual binding, cover or edition may vary.
This is a used book - there is no escaping the fact it has been read by someone else and it will show signs of wear and previous use. Overall we expect it to be in very good condition, but if you are not entirely satisfied please get in touch with us.