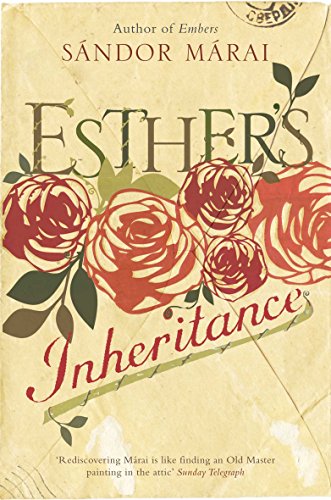 Two decades after leaving her, the great love of Esther's life sends her a telegram. Tomorrow, he tells her, he is coming back.

Esther and her cousin Nunu are thrown into confusion: until now their existence has been tranquil, self-governing, and they know that the mercurial Lajos will change all of that. Esther has not forgotten that her dazzling lover is a fantasist and a liar, nor that he caused her unimaginable hurt. But she also remembers how he made her feel, that he woke a part of her that has since been sleeping for twenty years.

Her friends come to her aid, a lavish meal is prepared, a car arrives at the house, and so begins an afternoon of high drama. Bringing two lives to converge on a single day in late summer, each one charged with emotion and acts that cannot be undone, this taut, evocative novel presents a remarkable heroine in Esther as she recounts, with dignity and wry humour, the final flare of her love.

GOR001293663
Esther's Inheritance by Sandor Marai
Sandor Marai
Used - Very Good
Hardback
Pan Macmillan
2009-01-02
160
0330471996
9780330471992
N/A
Book picture is for illustrative purposes only, actual binding, cover or edition may vary.
This is a used book - there is no escaping the fact it has been read by someone else and it will show signs of wear and previous use. Overall we expect it to be in very good condition, but if you are not entirely satisfied please get in touch with us.