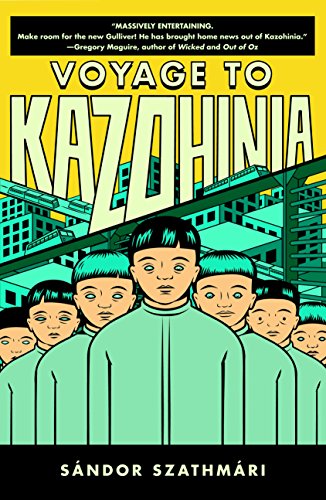 Voyage To Kazohinia
by Sandor Szathmari

Voyage To Kazohinia by Sandor Szathmari

S ndor Szathm ri's comical novel chronicles the travels of a modern Gulliver on the eve of World War II. A shipwrecked English ship's surgeon finds himself on an unknown island whose inhabitants, the Hins, live in a technologically advanced existence without emotions, desires, arts, money or politics. Soon unhappy with this bleak perfection, Gulliver asks to be admitted to the closed settlement of the Behins, beings with souls and atavistic human traits. But he's seen nothing yet...

"A page-turner for both the adult as well as the adolescent reader, Voyage to Kazohinia is a classic waiting to be discovered by every literate person. This newly translated and profoundly transformative novel ought to be taught in high schools and colleges across the English-speaking world. " --David Mandler, PhD, English Teacher at Stuyvesant High School, New York City "Massively entertaining! . . . Make room for the new Gulliver. He has brought home news out of Kazohinia." -- Gregory Maguire, author of Wicked and Out of Oz "Written in 1935, Voyage to Kazohinia is a strikingly postmodern and open-ended dystopia that rightfully belongs among the twentieth-century classics of the genre. And it is unique in being less a strident political cautionary tale than it is a brilliantly mordant reflection on government, reason, and language." -Carter Hanson, Associate Professor of English, Valparaiso University "[A] dystopian cult classic. . . . Gulliver washes up on the island of Kazohinia, which is populated by bizarre inhabitants . . . whose sense of morality and society force [him] to reconsider his own understanding of life, love, and death." -Publishers Weekly "Highly entertaining. . . . Readers familiar with the classic Swift satire will find much to admire here, but those unfamiliar with Gulliver's Travels should still have a good time." -Booklist "A satire on our world of power politics... clever and inventive." -- Allan Massie, The Wall Street Journal

Sandor Szathmari (1897-1974) was among the most extraordinary and elusive figures in twentieth-century Hungarian literature. The author of two published novels and several story collections in his native tongue, he is best known for Voyage to Kazohina--which, titled Kazohinia on most editions in Hungary, has been treasured by generations of readers.
Szathmari spent much of his career as a mechanical engineer; this, together with his limited oeuvre, the biting satire of his magnum opus, and his political persuasions--which ranged from an early, ambivalent affiliation with communism to anticommunism as Hungary became a communist dictatorship--kept him ever on the margins of the officially sanctioned literary establishment.
A central figure in Hungary's Esperanto movement for decades, Szathmari published his writings--including, most famously, Voyage to Kazohinia--in his own Esperanto-language editions, ensuring him a measure of international recognition and literary freedom during the communist era.

GOR007590020
Voyage To Kazohinia by Sandor Szathmari
Sandor Szathmari
Used - Very Good
Paperback
New Europe Books
2012-07-19
360
0982578121
9780982578124
N/A
Book picture is for illustrative purposes only, actual binding, cover or edition may vary.
This is a used book - there is no escaping the fact it has been read by someone else and it will show signs of wear and previous use. Overall we expect it to be in very good condition, but if you are not entirely satisfied please get in touch with us.