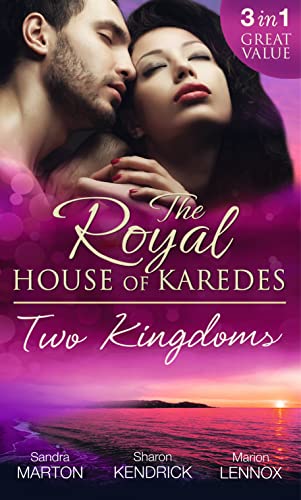 The Royal House of Karedes: Two Kingdoms
by Sandra Marton

A royal family, torn apart by pride and power, reunited by passion

A royal family, torn apart by pride and power, reunited by passion

Maria Santos. But when will this billionaire prince

determined to have stable girl Eleni - and knowing she's

a virgin makes her more appealing. But although Kaliq's body wants Eleni, his heart wants to protect her...

A royal scandal is imminent: a journalist has

sweetheart must come to him. And passion runs high as Andreas issues an ultimatum - to avoid disgrace,

Holly must become his bride!

Sandra Marton has written more than 75 novels and has approximately 24,000,000 (and counting!) books in print in twenty-plus languages. A four-time finalist for the RITA, the coveted award given by Romance Writers of America, Sandra has also won eight Romantic Times Magazine Reviewers' Choice Awards and has been honoured with Romantic Times' Career Achievement Award for Series Romance. Sandra lives in Connecticut with her husband. Sharon Kendrick started story-telling at the age of eleven and has never stopped. She likes to write fast-paced, feel-good romances with heroes who are so sexy they'll make your toes curl! She lives in the beautiful city of Winchester - where she can see the cathedral from her window (when standing on tip-toe!). She has two children, Celia and Patrick and her passions include music, books, cooking and eating - and drifting into daydreams while working out new plots. Marion Lennox is a country girl, born on an Australian dairy farm. She moved on, because the cows just weren't interested in her stories! Married to a `very special doctor', she has also written under the name Trisha David. She's now stepped back from her `other' career teaching statistics. Finally, she's figured what's important and discovered the joys of baths, romance and chocolate. Preferably all at the same time! Marion is an international award winning author.

GOR005363845
The Royal House of Karedes: Two Kingdoms: Billionaire Prince, Pregnant Mistress (The Royal House of Karedes, Book 1) / The Sheikh's Virgin Stable-Girl / The Prince's Captive Wife by Sandra Marton
Sandra Marton
Used - Very Good
Paperback
HarperCollins Publishers
2014-01-03
544
0263912205
9780263912203
N/A
Book picture is for illustrative purposes only, actual binding, cover or edition may vary.
This is a used book - there is no escaping the fact it has been read by someone else and it will show signs of wear and previous use. Overall we expect it to be in very good condition, but if you are not entirely satisfied please get in touch with us.