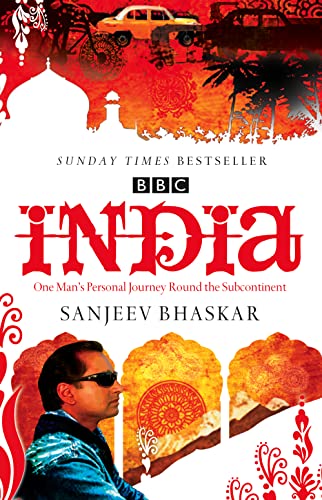 Sanjeev Bhaskar, the comedian and writer behind The Kumars at No. 42 embarks on an epic and highly personal journey through modern India. Sanjeev's characteristic humour and unique take on the country form the heart of this beautifully written travel book that became a Sunday Times bestseller in hardback when it accompanied his BBC series.

Sanjeev Bhaskar, the comedian and writer behind The Kumars at No. 42 embarks on an epic and highly personal journey through modern India. Sanjeev's characteristic humour and unique take on the country form the heart of this beautifully written travel book that became a Sunday Times bestseller in hardback when it accompanied his BBC series.

Exotic and diverse, richly colourful and endlessly complex - India is one of the most exciting countries to visit in the world today. Sanjeev Bhaskar of Goodness Gracious Me has visited his Indian relations there over many years, but this is his chance to delve deeper into what makes this country so fascinating, perplexing and often challenging to visit.

As Sanjeev travels from Delhi to Bombay, Jaipur to Calcutta, he meets ordinary and extraordinary Indian people from every background, and brings his natural warmth and sense of humour to these encounters. Although often baffled by the eccentricities of India, our endearingly good-natured guide never fails to find humour in these situations.

Sanjeev's India is also a personal journey as Sanjeev meets old relatives who reveal their moving and often traumatic stories of Indian's turbulent and bloody past, and comes to understand a little more about his own roots.

During his trip Sanjeev is invited to a middle-class wedding in Delhi as well as witnessing the poverty of the slums in the Calcutta backstreets. He wryly observes the polo-playing Maharajah jet-set in Jaipur as well as the kitsch of Bombay Bollywood, and experiences the Ganges lit up by a million floating candles for the ancient ritual of Diwali as well as the majestic colonial architecture of the British Raj.

With such an engaging and thoughtful travelling companion, we find ourselves going beyond the cliches to reveal a country steeped in history yet at the forefront of new technology, at once confusing, astonishing and jaw-droppingly beautiful.

`Sanjeev Bhaskar is the perfect guide to the endlessly astounding universe of sensations found on the subcontinent. Witty, observant, honest, affectionate and informed, he brings India alive on the page. His beautifully produced and dazzingly informative book made me want to drop everything and take the first plane out.'

Actor and writer Sanjeev Bhaskar first came to widespread public attention through the ground-breaking comedy sketch show Goodness Gracious Me. He followed up this success with his solo venture, The Kumars at No. 42. Sanjeev writes the show and plays the role of Sanjeev Kumar, who tries to host and broadcast a celebrity chat show from his parents' living room. Sanjeev can also be seen in the films Anita and Me, The Guru, The Mystic Masseur and Notting Hill. He is married to Kumars co-star Meera Syal.

GOR000834709
India with Sanjeev Bhaskar: One Man's Personal Journey Round the Subcontinent by Sanjeev Bhaskar
Sanjeev Bhaskar
Used - Very Good
Paperback
HarperCollins Publishers
2008-08-04
288
0007247397
9780007247394
N/A
Book picture is for illustrative purposes only, actual binding, cover or edition may vary.
This is a used book - there is no escaping the fact it has been read by someone else and it will show signs of wear and previous use. Overall we expect it to be in very good condition, but if you are not entirely satisfied please get in touch with us.