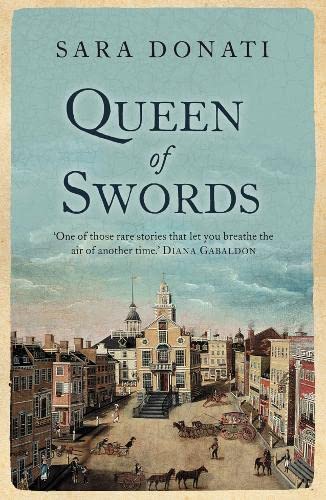 Queen of Swords by Sara Donati

Gripping historical adventure set in the 1800s from the French Antilles to the tumultous battle for New Orleans.

Queen of Swords by Sara Donati

Gripping historical adventure set in the 1800s from the French Antilles to the tumultous battle for New Orleans.

It is the late summer of 1814, and Hannah Bonner and her half brother Luke have spent more than a year searching the islands of the Caribbean for Luke's wife and the man who abducted her. But Jennet's rescue, so long in coming, is not the resolution they'd hoped for. In the spring she had given birth to Luke's son, and in the summer Jennet had found herself compelled to surrender the infant to a stranger in the hope of keeping him safe.

To claim the child, Hannah, Luke, and Jennet must journey first to Pensacola. There they learn a great deal about the family that has the baby. The Poiterins are a very rich, very powerful Creole family, totally without scruple. The matriarch of the family has left Pensacola for New Orleans and taken the child she now claims as her great-grandson with her.

New Orleans is a city on the brink of war, a city where prejudice thrives and where Hannah, half Mohawk, must tread softly. Careful plans are made as the Bonners set out to find and reclaim young Nathaniel Bonner. Plans that go terribly awry, isolating them from each other in a dangerous city at the worst of times.

Sure that all is lost, and sick unto death, Hannah finds herself in the care of a family and a friend from her past, Dr. Paul de Guise Savard dit Saint-d'Uzet. It is Dr. Savard and his wife who save Hannah's life, but Dr. Savard's half brother who offers her real hope. Jean-Benoit Savard, the great-grandson of French settlers, slaves, and Choctaw and Seminole Indians, is the one man who knows the city well enough to engineer the miracle that will reunite the Bonners and send them home to Lake in the Clouds. With Ben Savard's guidance, allies are drawn from every segment of New Orleans's population and from Andrew Jackson's army, now pouring into the city in preparation for what will be the last major battle of the War of 1812.

Praise for Sara Donati and the Wilderness series:

`One of those rare strories that lets you breathe the air of another time and leave your footsteps on the snow of a wild, strange place.' Diana Gabaldon

`Each time you open a book, you hope to discover a story that will make your spirit of adventure and romance sing. This book delivers on that promise.'
Amanda Quick

Sara Donati lives with her husband and daughter in the North-West of the USA.

GOR001605822
9780007108329
000710832X
Queen of Swords by Sara Donati
Sara Donati
Used - Very Good
Paperback
HarperCollins Publishers
2007-08-06
592
N/A
Book picture is for illustrative purposes only, actual binding, cover or edition may vary.
This is a used book - there is no escaping the fact it has been read by someone else and it will show signs of wear and previous use. Overall we expect it to be in very good condition, but if you are not entirely satisfied please get in touch with us
Trustpilot