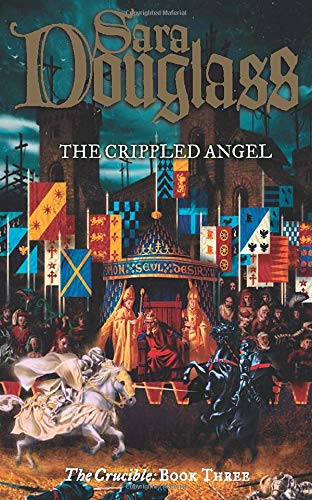 The Crippled Angel by Sara Douglass

The third book of The Crucible, an exciting new historical fantasy from the author of the popular Axis Trilogy.

The Crippled Angel (The Crucible Trilogy, Book 3) by Sara Douglass

The third book of The Crucible, an exciting new historical fantasy from the author of the popular Axis Trilogy.

The crises enveloping Europe begin to alter the mentality of the world. People are no longer content with their lot in life; they have grown ambitious and disruptive. The Church is losing its grip, not only are the heresies raging out of control, but more and more priests are speaking out against the Roman Church... the order of the world is dissolving into chaos.

Neville faces his own crisis as he begins to question his faith. Inflitrating many social circles, gathering information for the Church, he meets the heretic priest John Wycliffe and the peasant rebel Wat Tyler. He suspects strongly that they are shapeshifting demons... yet he cannot help but agree with their criticisms of the traditional structures of society and of the Church itself.

Neville does not know it, but his soul has become the ultimate battleground. The choices he makes will dictate the final outcome of the battle between the forces of good, and those of evil.

Praise for The Axis Trilogy:

GOR011139992
The Crippled Angel (The Crucible Trilogy, Book 3) by Sara Douglass
Sara Douglass
The Crucible Trilogy
Used - Like New
Paperback
HarperCollins Publishers
2002-11-04
480
0007108494
9780007108497
N/A
Book picture is for illustrative purposes only, actual binding, cover or edition may vary.
The book has been read, but looks new. The book cover has no visible wear, and the dust jacket is included if applicable. No missing or damaged pages, no tears, possible very minimal creasing, no underlining or highlighting of text, and no writing in the margins.
Trustpilot