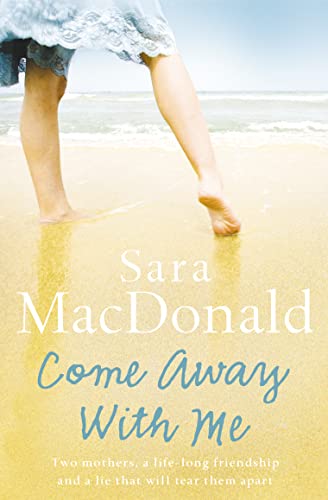 Come Away With Me
by Sara MacDonald

A chance meeting between two old friends leads to an obsessive love which will unearth long-hidden secrets, causing a bitter rift between two families.

Come Away With Me Summary

Come Away With Me by Sara MacDonald

A chance meeting between two old friends leads to an obsessive love which will unearth long-hidden secrets, causing a bitter rift between two families.

Jenny and Ruth were best friends at school until Ruth abruptly moved away from their Cornish village and they lost all contact. Fourteen years later, a chance meeting on a train throws both their lives into turmoil. As they begin to fill in the gaps from the years that have passed, their old friendship sparks back into life.

One glimpse of Ruth's son Adam sends Jenny into a spiral of love, grief and obsession. Adam is the image of Jenny's husband, Tom, killed suddenly and tragically six months earlier. As Jenny discovers the truth about Adam, a powerful bond springs up between them that will have unforeseen consequences for both families.

`Come Away with Me' is a moving and provoking portrayal of how two women challenge each other's identity in what becomes an unbearable life swap.

Come Away With Me Reviews

Praise for `Come Away with Me'

`A very good read' Woman's Own

`A compelling story from a talented writer' Belfast Telegraph

Praise for Sara MacDonald and her novels

`a tender story about three generations of a family touched by prejudice, violence and war.' Woman's Own

'Intriguing themes are cleverly woven together...I found myself swept along by the sheer interest of every page and moved by the unerring way in which each character is painted...it grips to the end.' Country Life

Sara Macdonald has written all her life. She has been an army wife, living all over the world, and now lives in Cornwall. This is her fourth novel for HarperCollins.

GOR010576856
Come Away With Me by Sara MacDonald
Sara MacDonald
Used - Like New
Paperback
HarperCollins Publishers
2007-04-01
480
0007201575
9780007201570
N/A
Book picture is for illustrative purposes only, actual binding, cover or edition may vary.
The book has been read, but looks new. The book cover has no visible wear, and the dust jacket is included if applicable. No missing or damaged pages, no tears, possible very minimal creasing, no underlining or highlighting of text, and no writing in the margins.