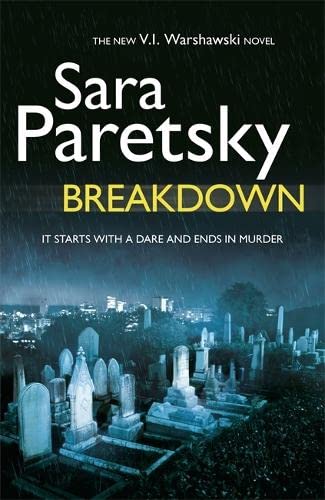 In Stock
$22.49
inc. GST
Sara Paretsky's new bestseller and fifteenth in the series pits V.I. Warshawski against a right-wing political pundit with powerful connections in a riveting novel that combines contemporary issues and suspense in Paretsky's unique way.
Like New Very Good Good
Only 1 left

Carmilla, Queen of the Night, is a shape-shifting raven whose fictional exploits thrill girls all over the world. When tweens in Chicago's Carmilla Club hold an initiation ritual in an abandoned cemetery, they stumble on an actual corpse, a man stabbed through the heart in a vampire-style slaying.

The girls include daughters of some of Chicago's most powerful families: the grandfather of one, Chaim Salanter, is one of the world's wealthiest men; the mother of another, Sophy Durango, is the Illinois Democratic candidate for Senate.

For V.I. Warshawski, the questions multiply faster than the answers. Is the killing linked to a hostile media campaign against Sophy Durango? Or to Chaim Salanter's childhood in Nazi-occupied Lithuania? As V.I. struggles for answers, she finds herself fighting enemies who are all too human.

Both Paretsky and her sharp-tongued justice-seeker, V.I. Warshawski, remain formidable in the masterfully suspenseful fifteenth novel in this superb and adored Chicago-set series . . . V.I. reigns as crime fiction's spiky, headstrong warrior woman of conscience, and Paretsky, classy champion of the powerless, has never been more imaginative, rueful, transfixing, and righteous. * Booklist, starred review *
Plotted with all Paretsky's customary generosity, this standout entry harnesses her heroine's righteous anger to some richly deserving targets, all linked together in a truly amazing finale. * Kirkus, starred review *
She is writing with the kind of passion for social justice that inspired Chandler and Hammett * Joan Smith, Sunday Times *
The thing about Sara Paretsky is, she's tough . . . she doesn't flinch from examining old social injustices others might find too shameful (and too painful) to dig up * New York Times *
Paretsky's eye is sharp but it's not just about satire. BREAKDOWN is also a propulsive rush of a thriller. Somehow she packs in politics, great characters, nifty wisecracks and a breakneck story. That takes some doing. * Metro *
Joy and rapture - Vic's back, Paretsky's heroine, V.I. Warshawski, is the thinking woman's private detective; intelligent and brave, yet just as vulnerable and muddled as the rest of us . . . Don't miss * Saga Magazine *
The usual pleasure points are ticked: gutsy liberal opinions; hidden urban connections; public issues and personal pains; plust appearances from cousin Petra and the dogs . . . this is a solid additon to an involving series. * Financial Times *
Smart and sharp-tongued Chicago detective Warshawksi is looking for her cousin's curfew-breaking child (wrong - sorry, Sara!) when she finds a man's corpse impaled on a steel stake in a cemetery. America's travails are laid as bare as those entrails in the subsequent investigation. * Sunday Express *

GOR010600374
Breakdown: V.I. Warshawski 15 by Sara Paretsky
Sara Paretsky
Used - Like New
Hardback
Hodder & Stoughton General Division
2012-06-21
448
0340994134
9780340994139
N/A
Book picture is for illustrative purposes only, actual binding, cover or edition may vary.
The book has been read, but looks new. The book cover has no visible wear, and the dust jacket is included if applicable. No missing or damaged pages, no tears, possible very minimal creasing, no underlining or highlighting of text, and no writing in the margins.