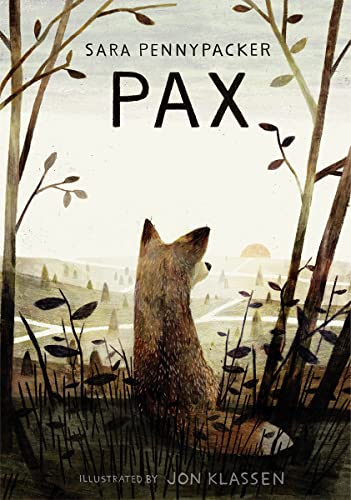 A moving story of the extraordinary friendship between a boy and his fox, and their epic journey to be reunited. Beautifully illustrated by multi-award winner, Jon Klassen.

A moving story of the extraordinary friendship between a boy and his fox, and their epic journey to be reunited. Beautifully illustrated by multi-award winner, Jon Klassen.

Pax was only a kit when his family was killed and he was rescued by `his boy', Peter. Now the country is at war and when his father enlists, Peter has no choice but to move in with his grandfather. Far worse than leaving home is the fact that he has to leave Pax behind. But before Peter spends even one night under his grandfather's roof he sneaks out into the night, determined to find his beloved friend. This is the story of Peter, Pax, and their journeys back to each other as war rampages throughout the country.

A profound and moving story with stunning illustrations by award-winning illustrator, Jon Klassen, `Pax' is destined to become a classic in the vein of `Charlotte's Web' and `Watership Down'.

`Pax the book is like Pax the fox: half wild and wholly beautiful.'
New York Times (Online)

'A touching story about a boy and his pet, as well as a depection of the devestating and often unseen consequences of war'
Book Trust (online)

`A beautifully wrought, utterly compelling novel about the powerful relationship between a boy and his fox.'
Sainsbury's Entertainment (online)

`Every moment in the graceful, fluid narrative is believable ... Moving and poetic.'
Kirkus (online)

Sara Pennypacker is the author of the award-winning, New York Times best-selling Clementine series, the novel `Summer of the Gypsy Moths', and the picture books `Pierre in Love', `Sparrow Girl', and `Meet the Dullards'. She lives in the US. You can visit her online at www.sarapennypacker.com.

Jon Klassen is a Canadian writer and illustrator of children's books and an animator. He won both the American Caldecott Medal and the British Kate Greenaway Medal for children's book illustration, recognizing the 2012 picture book `This is Not My Hat'.

GOR008352134
Pax by Sara Pennypacker
Sara Pennypacker
Used - Like New
Hardback
HarperCollins Publishers
2016-02-25
288
0008124094
9780008124090
N/A
Book picture is for illustrative purposes only, actual binding, cover or edition may vary.
The book has been read, but looks new. The book cover has no visible wear, and the dust jacket is included if applicable. No missing or damaged pages, no tears, possible very minimal creasing, no underlining or highlighting of text, and no writing in the margins.