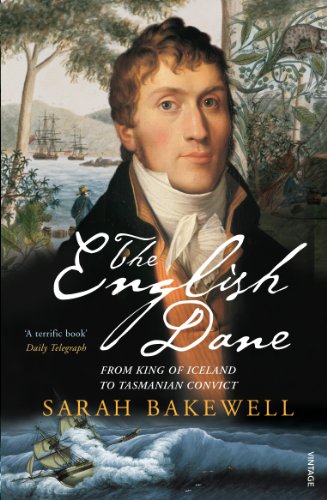 The English Dane
by Sarah Bakewell

In Stock
$18.99
+10% GST
This gripping nineteenth-century adventure stars Jorgen Jorgenson, who ran away to sea at fourteen and began a brilliant career by sailing to establish the first colony in Tasmania.
Very Good
Only 1 left

The English Dane: From King of Iceland to Tasmanian Convict by Sarah Bakewell

This gripping nineteenth-century adventure stars Jorgen Jorgenson, who ran away to sea at fourteen and began a brilliant career by sailing to establish the first colony in Tasmania. Twists of fortune then found him captaining a warship for Napoleon before joining a British trading voyage to Iceland, where he staged an outrageous coup and ruled the country for two months. Much lay ahead, from imprisonment in the hulks to patronage by Joseph Banks and travels in Europe as a British spy. But Jorgenson was dogged by his own excesses, and ended up transported as a convict to the very colony he helped to found. Here he reinvented himself again as an explorer, and, despite his sympathy for the people, was caught up in the terrible Aboriginal clearances. Using unpublished sources and letters, Sarah Bakewell tells his astonishing tale with dazzling verve.

"Bakewell is superbly matched to the task. Her account of the world encountered by Jorgenson is as rich and nuanced as her description of his life" * Independent *
"Precise, amusing and intriguing. A vivid and moving portrait of an extraordinary but flawed man... A terrific book" * Daily Telegraph *
"Sarah Bakewell has a fine story to tell, and she is its skilled servant...A wonderful, intelligently told story" -- Thomas Keneally * Guardian *
"Splendid... An extraordinary story brilliantly told" * Australian *
"An accomplished book" * Sunday Times *

Sarah Bakewell had a wandering childhood in Europe, Australia and England. After studying at the University of Essex, she was a curator of early printed books at the Wellcome Library before becoming a full-time writer, publishing her highly acclaimed biographies The Smart and How To Live. She lives in London, where she teaches creative writing at City University and catalogues rare book collections for the National Trust.. www.sarahbakewell.com

GOR001409614
The English Dane: From King of Iceland to Tasmanian Convict by Sarah Bakewell
Sarah Bakewell
Used - Very Good
Paperback
Vintage Publishing
2006-03-02
352
0099438062
9780099438069
N/A
Book picture is for illustrative purposes only, actual binding, cover or edition may vary.
This is a used book - there is no escaping the fact it has been read by someone else and it will show signs of wear and previous use. Overall we expect it to be in very good condition, but if you are not entirely satisfied please get in touch with us.