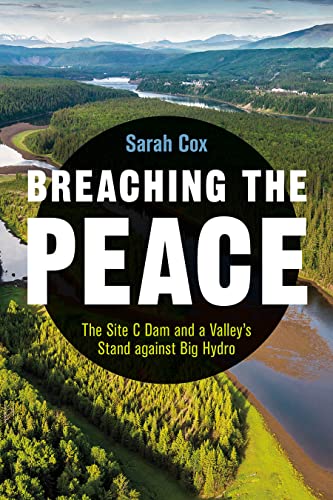 Breaching the Peace
by Sarah Cox

Breaching the Peace: The Site C Dam and a Valley's Stand against Big Hydro by Sarah Cox

Breaching the Peace tells the story of the ordinary citizens who are standing up to the most expensive megaproject in BC history and the government-sanctioned bullying that has propelled it forward. Starting in 2013, journalist Sarah Cox travelled to the Peace River Valley to talk to locals about the Site C dam and BC Hydro's claim that the clean energy project was urgently needed. She found farmers, First Nations, and scientists caught up in a modern-day David-and-Goliath battle to save the valley, their farms, and traditional lands from wholesale destruction. Told in frank and moving prose, their stories stand as a much-needed cautionary tale at a time when concerns about global warming have helped justify a renaissance of environmentally irresponsible hydro megaprojects around the world.

Breaching the Peace is an excellent title for Sarah Cox's important book about the Site C Dam. That title yields a cascade of kaleidoscopic connotations - insights into this complex history of a river being broken up, of communities being divided, of "breach of the peace" lawsuits, and of byzantine machinations by BC Hydro to overcome the resistance.

Cox supplements her journalistic account of the movement with extensive ethnographic work with the people at its forefront... the resistance has been immensely instructive of how social movements emerge and evolve to make a difference. Breaching the Peace is therefore a must-read for students and scholars of development studies, environmental studies, and social movements. Summing Up: Highly Recommended.

-- R.C. Cottrell, California State University * CHOICE *
The prose in [Breaching the Peace] is lapidary, beautifully crafted to give the reader a keen sense of the unique beauties of the Peace as well as some of the personalities in the indigenous/settler alliance that is fighting to protect it. -- Tom Sandborn * Columbia Journal *

[This is] a breathtaking examination of how Site C was rammed through despite its devastating impacts on public finances and an ecological treasure trove ... Cox delivers science journalism of the highest order, presented with passionate intensity and relentless curiosity.

Sarah Cox has written a searing new book about the scandalous Site C Dam in British Columbia ... [she] expertly provides the context to the Site C saga that allows readers to understand what has happened here. Few people, except those who stand to profit immensely, have ever been enthusiastic about this project.

Sarah Cox is an award-winning journalist who specializes in energy and environmental issues. Her work has appeared in numerous magazines, online publications, and provincial and national newspapers. Breaching the Peace is her first book. She lives in Victoria, British Columbia.

2 Treaty 8 Stewards of the Land

4 The Birth of a Goliath

6 They Call It Progress, We Call It Destruction

8 The Nature of the Peace

GOR010111941
Breaching the Peace: The Site C Dam and a Valley's Stand against Big Hydro by Sarah Cox
Sarah Cox
Used - Very Good
Paperback
University of British Columbia Press
2018-05-01
312
0774890266
9780774890267
Winner of Roderick Haig-Brown Regional Prize, BC Book Prizes 2019 (Canada) Short-listed for Shaughnessy Cohen Prize for Political Writing, Writers' Trust of Canada 2019 (Canada)
Book picture is for illustrative purposes only, actual binding, cover or edition may vary.
This is a used book - there is no escaping the fact it has been read by someone else and it will show signs of wear and previous use. Overall we expect it to be in very good condition, but if you are not entirely satisfied please get in touch with us.