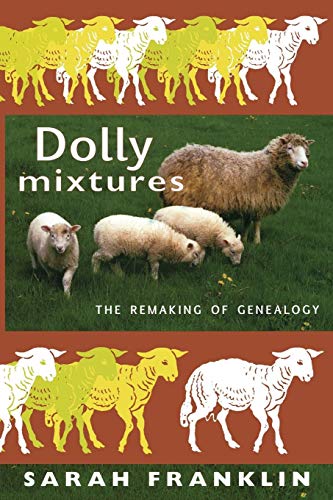 Dolly Mixtures: The Remaking of Genealogy by Sarah Franklin

While the creation of Dolly the sheep, the world's most famous clone, triggered an enormous amount of discussion about human cloning, in Dolly Mixtures the anthropologist Sarah Franklin looks beyond that much-rehearsed controversy to some of the other reasons why the iconic animal's birth and death were significant. Building on the work of historians and anthropologists, Franklin reveals Dolly as the embodiment of agricultural, scientific, social, and commercial histories which are, in turn, bound up with national and imperial aspirations. Dolly was the offspring of a long tradition of animal domestication, as well as the more recent histories of capital accumulation through selective breeding, and enhanced national competitiveness through the control of biocapital. Franklin traces Dolly's connections to Britain's centuries-old sheep and wool markets (which were vital to the nation's industrial revolution) and to Britain's export of animals to its colonies-particularly Australia-to expand markets and produce wealth. Moving forward in time, she explains the celebrity sheep's links to the embryonic cell lines and global bioscientific innovation of the late twentieth century and early twenty-first.

Franklin combines wide-ranging sources-from historical accounts of sheep-breeding, to scientific representations of cloning by nuclear transfer, to popular media reports of Dolly's creation and birth-as she draws on gender and kinship theory as well as postcolonial and science studies. She argues that there is an urgent need for more nuanced responses to the complex intersections between the social and the biological, intersections which are literally reshaping reproduction and genealogy. In Dolly Mixtures, Franklin uses the renowned sheep as an opportunity to begin developing a critical language to identify and evaluate the reproductive possibilities that post-Dolly biology now faces, and to look back at some of the important historical formations that enabled and prefigured Dollys creation.

"Deftly blending insights drawn from anthropology, history, science, animal husbandry, and current politics, Sarah Franklin has written an imaginative and illuminating account of the iconic Dolly and her many meanings."-Harriet Ritvo, author of The Platypus and the Mermaid: And Other Figments of the Classifying Imagination
"Sarah Franklin's timely, highly original book tracks sheep and sheep-human associations through their many pathways in deep and recent pasts and near futures; in economies and markets, in research institutes and pharmaceutical houses, in British national and colonial ventures; in the transcontinental traffic between agricultural sciences and human medicine, especially reproductive medicine; in kin-making within and between species; in the transit of famous animals from laboratory subjects to popular cultural icons; and in the trajectories from sheep breeding to human embryonic stem cell research."-Donna Haraway, author of Modest_Witness@Second_Millennium.FemaleMan (c)_Meets_OncoMouse (TM): Feminism and Technoscience
"[D]olly Mixtures lays an important foundation for engagement with Dolly-and other lab made/modified organism-as well as with more general contemporary practices of biomedicine, agriculture and capital accumulation (and their intersections). More than this, it is a wonderfully informative and enjoyable read - for sheep lovers and the non-ovine-informed alike." -- Thom van Dooren * Australian Humanities Review *
"[T]his book is classic Franklin, a wolf in sheep's clothing; it sneaks up on you and one emerges with a rich understanding of the sheep worlds she portrays. Franklin's book does not make her readers better investors or better able to preempt the next sheep epidemic or draw the line on cloning acceptability. Instead it succeeds wonderfully at the very different task of making us better and more interesting thinkers about Dolly and her genealogies, from the hetero-chronicity unleashed by the enucleated family of cloning to the continued significance of life-stock in and as nation and capital." -- Charis Thompson * British Journal of Sociology *
"A challenging yet pleasurable read, [Dolly Mixtures] is well paced, impeccably organized, and infused with an array of intriguing illustrations, refreshing subtlety and a sense of humour. . . ." -- Joyce M. Youmans * Interventions *
"Franklin shows the importance of sheep farming for the early settler economy and the consequent displacement of indigenous people and their subsistence economy by 'waves of white sheep and settlers'.... [S]ociologists, cultural anthropologists, philosophers and historians as well as bio-scientists....will find it a rich, detailed, and thought-provoking genealogical reading of Dolly, which successfully locates her significance within wider historical trajectories." -- Hannah Farrimond * Metascience *
"In her stimulating quest to spin a 'thickened' genealogy for Dolly the Sheep, a series of reflections on the meanings of Dolly's birth, fertility, and mortality that might offer new ways to think about the significance of breeding present, past, and future, Franklin twists together ruminations on a spectrum of sheep-related topics far-flung in space and time. . . " -- Francesca Bray * Medical Anthropology Quarterly *
"With Dolly Mixtures, an ethnographic monograph instantiating the 'animal turn' in social studies of health science, Franklin makes a watershed contribution. . . . Franklin's approachable language makes this text suitable for upper-level undergraduate and graduate-level analysis. She provides much 'fodder' for thought, opening avenues for empirically grounded and theoretically astute discourses to help make sense of contemporary human-animal relations." -- Gwendolyn Blue and Melanie Rock * Health *
[D]ifficult and theoretically complex . . . but with such ease of writing and presentation that [Franklin] skillfully threads deep analysis with personal narrative, punctuated by photographs and jokes. I do not know how many writers could carry this book off, but Franklin successfully reinterprets biology, genetics, and technology through the stories she spins around Dolly. Until I read Dolly Mixtures, I would not have believed that innovative feminist theory on technology could be found in a book that covers the history of British capital, empire, nation, genetics, popular culture, and reproduction with a sheep unashamedly at its center. . . . Read it. You will never approach feminist theory (or sheep) in the same way again." -- Wendy Harcourt * Signs *

Sarah Franklin is Professor of Social Studies of Biomedicine and Associate Director of the BIOS Centre for the study of bioscience, biomedicine, biotechnology, and society at the London School of Economics and Political Science. She is the author of Embodied Progress: A Cultural Account of Assisted Conception; a coauthor of Born and Made: An Ethnography of Preimplantation Genetic Diagnosis and Technologies of Procreation: Kinship in the Age of Assisted Conception; and a coeditor of Relative Values: Reconfiguring Kinship Studies, also published by Duke University Press.

Acknowledgments ix
Origins 1
1. Sex 19
2. Capital 46
3. Nation 73
4. Colony 118
5. Death 158
Breeds 195
Notes 209
Bibliography 231
Index 245
GOR006432468
9780822339205
082233920X
Dolly Mixtures: The Remaking of Genealogy by Sarah Franklin
Sarah Franklin
A John Hope Franklin Center Book
Used - Very Good
Paperback
Duke University Press
2007-04-11
264
N/A
Book picture is for illustrative purposes only, actual binding, cover or edition may vary.
This is a used book - there is no escaping the fact it has been read by someone else and it will show signs of wear and previous use. Overall we expect it to be in very good condition, but if you are not entirely satisfied please get in touch with us
Trustpilot