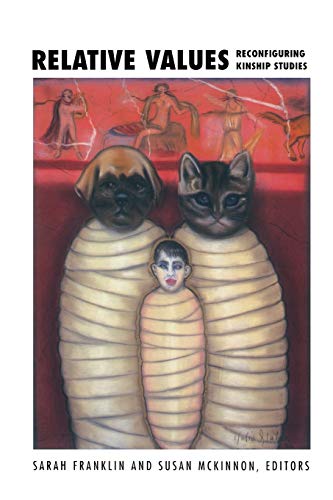 Has kinship become more structureless, commodified, and flexible in the global era? Do such representations overlook the diffuse, enduring ties that kinship has long signified? What has been the effect of contemporary bio-politics on kinship practices and theories? This title deals with these questions.

The essays in Relative Values draw on new work in anthropology, science studies, gender theory, critical race studies, and postmodernism to offer a radical revisioning of kinship and kinship theory. Through a combination of vivid case studies and trenchant theoretical essays, the contributors-a group of internationally recognized scholars-examine both the history of kinship theory and its future, at once raising questions that have long occupied a central place within the discipline of anthropology and moving beyond them.
Ideas about kinship are vital not only to understanding but also to forming many of the practices and innovations of contemporary society. How do the cultural logics of contemporary biopolitics, commodification, and globalization intersect with kinship practices and theories? In what ways do kinship analogies inform scientific and clinical practices; and what happens to kinship when it is created in such unfamiliar sites as biogenetic labs, new reproductive technology clinics, and the computers of artificial life scientists? How does kinship constitute-and get constituted by-the relations of power that draw lines of hierarchy and equality, exclusion and inclusion, ambivalence and violence? The contributors assess the implications for kinship of such phenomena as blood transfusions, adoption across national borders, genetic support groups, photography, and the new reproductive technologies while ranging from rural China to mid-century Africa to contemporary Norway and the United States. Addressing these and other timely issues, Relative Values injects new life into one of anthropology's most important disciplinary traditions.
Posing these and other timely questions, Relative Values injects an important interdisciplinary curiosity into one of anthropology's most important disciplinary traditions.

This important collection of inter-disciplinary essays on the new kinship shows diverse ways that relative values, shifting solidarities, and partial connections of truth and affect today create the ties that bind.-Paul Rabinow, University of California, Berkeley
This is one of the few books which crosses disciplinary terrains with clear and brilliant consequences. It not only brings anthropology into every sphere, but shows that fundamental thinking on life and kinship under conditions of globalization compel us to accept and work with a radical remapping of knowledge. This text considers these issues with prismatic illumination and is unprecedented in its success.-Judith Butler, University of California, Berkeley
The challenge of recoding our kinship studies and our kinship behaviour remains, but the essays in Relative Values provide a broad template that makes meeting the challenge possible-and necessary. Scholars in a multitude of fields will be grateful for this finely executed collection. -- Judith S. Modell, * Journal of the Royal Anthropological Institute *

Sarah Franklin is Reader in Cultural Anthropology for the Department of Sociology at Lancaster University, England.

Susan McKinnon is Associate Professor of Anthropology at the University of Virginia.