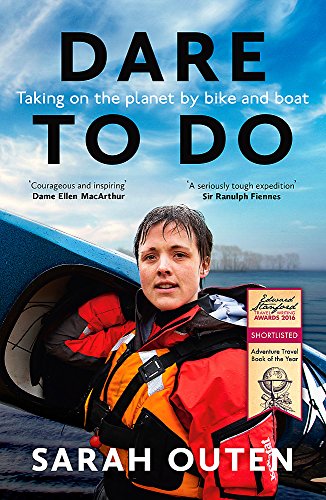 Dare to Do
by Sarah Outen

Dare to Do Summary

Dare to Do: Taking on the planet by bike and boat by Sarah Outen

SHORTLISTED FOR THE EDWARD STANFORD ADVENTURE TRAVEL BOOK OF THE YEAR

On 1 April 2011, rower and adventurer Sarah Outen set off in her kayak from Tower Bridge for France. Her aim was simple: to circle the globe entirely under her own steam - cycling, kayaking and rowing across Europe, Asia, the Pacific, North America, the Atlantic and eventually home. A year later, Sarah was plucked from the Pacific ocean amid tropical storm Mawar, her boat broken, her spirit even more so.

But that wasn't the end. Despite ill health and depression, giving up was not an option. So Sarah set off once more to finish what she had started, becoming the first woman to row solo from Japan to Alaska, as well as the first woman to row the mid-Pacific from West to East. She kayaked the treacherous Aleutian chain and cycled North America, before setting out on the Atlantic, despite the risk of another row-ending storm...

Dare to Do is more than an adventure story. It is a story of the kindness of strangers and the spirit of travel; a story of the raw power of nature, of finding love in unexpected places, and of discovering your inner strength. It is about trying and failing, and trying again, and about how, even when all seems lost, you can find yourself.

Dare to Do Reviews

An epic feat.--The Times
Definitely mad. Definitely marvellous. A seriously tough expedition.--Sir Ranulph Fiennes
Her natural charisma, talent for storytelling and unrivalled persistence sets Sarah Outen apart. She is the top female adventurer of the 21st Century - nobody else comes close.--Dave Cornthwaite
Like Wild - only Wilder.--BT Sport
Outen's story is remarkable.--Sunday Times
Sarah has raised the bar of adventure travel with genuinely ground-breaking triumphs. And it has been her willingness to share the inner journey, the doubts, fears, and frustrations, that has truly set her apart.--Roz Savage, author of 'Stop Drifting, Start Rowing'
Sarah has self-reliance and belief in quantities I haven't come across in anyone else. She is a wonderful and nutty individual with a powerful story to tell.--Mark Beaumont
Sarah is an honest, open, courageous and inspiring person... and has a contagious love for life. I can't wait for her book.--Dame Ellen MacArthur
That's the way to do adventure.--Ben Fogle
There is only one Sarah Outen. A unique blend of powerful female athlete and silly friend.--Ed Stafford

Sarah Outen is a British adventurer, motivational speaker and author. In November 2015 Sarah completed her London2London: Via the World expedition, which saw her attempt to kayak, cycle and row 25,000 miles around the Northern Hemisphere. The journey took 4.5 years and was all the richer for not turning out exactly as had been planned.
www.sarahouten.com
@SarahOuten

GOR010705030
Dare to Do: Taking on the planet by bike and boat by Sarah Outen
Sarah Outen
Used - Like New
Paperback
John Murray Press
2017-08-10
320
1473655285
9781473655287
N/A
Book picture is for illustrative purposes only, actual binding, cover or edition may vary.
The book has been read, but looks new. The book cover has no visible wear, and the dust jacket is included if applicable. No missing or damaged pages, no tears, possible very minimal creasing, no underlining or highlighting of text, and no writing in the margins.