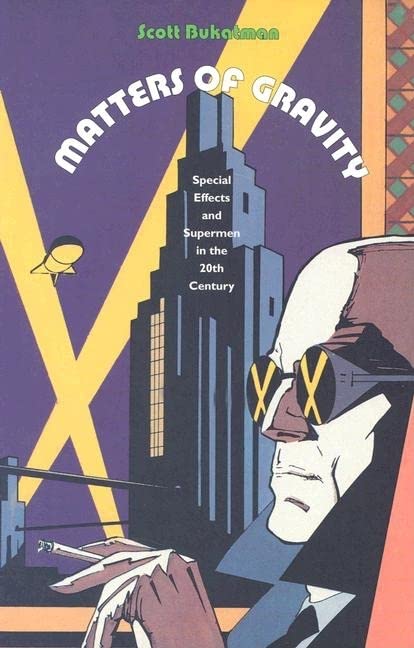 Matters of Gravity by Scott Bukatman

Matters of Gravity: Special Effects and Supermen in the 20th Century by Scott Bukatman

The headlong rush, the rapid montage, the soaring superhero, the plunging roller coaster-Matters of Gravity focuses on the experience of technological spectacle in American popular culture over the past century. In these essays, leading media and cultural theorist Scott Bukatman reveals how popular culture tames the threats posed by technology and urban modernity by immersing people in delirious kinetic environments like those traversed by Plastic Man, Superman, and the careening astronauts of 2001: A Space Odyssey and The Right Stuff. He argues that as advanced technologies have proliferated, popular culture has turned the attendant fear of instability into the thrill of topsy-turvydom, often by presenting images and experiences of weightless escape from controlled space.

Considering theme parks, cyberspace, cinematic special effects, superhero comics, and musical films, Matters of Gravity highlights phenomena that make technology spectacular, permit unfettered flights of fantasy, and free us momentarily from the weight of gravity and history, of past and present. Bukatman delves into the dynamic ways pop culture imagines that apotheosis of modernity: the urban metropolis. He points to two genres, musical films and superhero comics, that turn the city into a unique site of transformative power. Leaping in single bounds from lively descriptions to sharp theoretical insights, Matters of Gravity is a deft, exhilarating celebration of the liberatory effects of popular culture.

"Matters of Gravity is more than a collection of tour de force essays, although it is certainly that. It maps an important theoretical and critical project, reclaiming the 'lively arts' and exploring the kinetic and affective dimensions of popular culture. Scott Bukatman's breathless prose and conceptual pyrotechnics embody popular culture's dynamism, making us feel it, making us want to dance it. His writing crackles with wit, sparkles with vividness, and throbs with his own passionate engagement with his topic."-Henry Jenkins, coeditor of Hop on Pop: The Politics and Pleasures of Popular Culture
"Scott Bukatman is one of the very top figures in the attempt of cultural studies to understand modernity by looking at the interlocking of such phenomena as urbanism, new forms of masculinity, new technologies, and the role of the body."-Dana Polan, author of the British Film Institute books In a Lonely Place and Pulp Fiction

Scott Bukatman is Associate Professor of Art and Art History at Stanford University. He is the author of Terminal Identity: The Virtual Subject in Postmodern Science Fiction, published by Duke University Press.

Preface xi
Acknowledgments xv
Introduction 1
One Remembering Cyberspace
1 There's Always . . . Tomorrowland: Disney and the Hypercinematic Experience 13
2 Gibson's Typewriter 32
3 X-Bodies: The Torment of the Mutant Superhero (1994) 48
Two Kaleidoscopic Perceptions
4 The Artificial Infinite: On Special Effects and the Sublime 81
5 The Ultimate Trip: Special Effects and Kaleidoscopic Perception 111
Three The Grace of Beings
6 Taking Shape: Morphing and the Performance of Self 133
7 Syncopated City: New York in Musical Film (1929-1961) 157
8 The Boys in the Hoods: A Song of the Urban Superhero (2000) 184
Notes 225
Bibliography 257
Index 270
GOR001988690
Matters of Gravity: Special Effects and Supermen in the 20th Century by Scott Bukatman
Scott Bukatman
Used - Very Good
Paperback
Duke University Press
2003-07-21
296
0822331195
9780822331193
N/A
Book picture is for illustrative purposes only, actual binding, cover or edition may vary.
This is a used book - there is no escaping the fact it has been read by someone else and it will show signs of wear and previous use. Overall we expect it to be in very good condition, but if you are not entirely satisfied please get in touch with us
Trustpilot