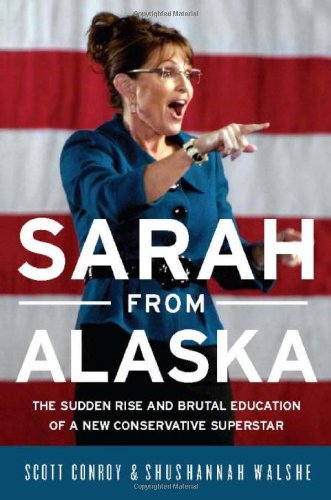 Sarah from Alaska
by Scott Conroy

Used Price
$17.49
inc. GST
Free Shipping in Australia
Presents the behind-the-scenes story of vice presidential campaign of Sarah Palin. This book investigates its ramifications inside the Republican Party and for both Palin's and America's political future.
Very Good

Sarah from Alaska: The Sudden Rise and Brutal Education of a New Conservative Superstar by Scott Conroy

Two 'embedded reporters' in Sarah Palin's historic vice presidential campaign - Conroy from CBS, Walshe from FOX - tell the behind-the-scenes story of the campaign and investigate its ramifications inside the Republican Party and for both Palin's and America's political future. Sarah Palin's two month run for the vice presidency was one of the most exciting, bizarre, outrageous and in many respects most secretive campaigns ever run. Regardless of how you feel about her, it's almost impossible from a standpoint of wanting to understand the nature of American politics and sheer curiosity (or outright voyeurism), not to want to know what actually went on behind the scenes when Sarah wasn't out there backslapping and rallying her fans-and what Republican insiders were and are thinking about her political future and the future of the party. Scott Conroy of CBS News and Shushannah Walshe of Fox News were two of only five journalists embedded in the Palin campaign, 24/7 for the full two month run and connected with virtually everyone on her team. Almost everyone involved-from Steve Biegun, Palin's senior foreign policy adviser, to her beauty stylist / make-up artist, to neocon stalwart William Kristol who supported Palin from the beginning- is eager to go on record and share their experiences and observations with reporters they trust. And Sarah Palin herself has agreed to give them an extensive interview for the book as well. Though the Palin campaign probably qualifies as the vice presidential campaign which had the most impact on any presidential election in the history of this country, ironically it was also the campaign most shrouded in mystery. By having the cooperation of almost all the players in the campaign, the authors will be able to provide the American public with key information and insights which they are entitled to about this pivotal campaign and about Sarah Palin, who is unquestionably here to stay. This will be a truly entertaining book, as well as critical reading for anyone interested in American politics.

"Anchorage Daily News"
"A pleasant relief from all those pro- and anti-screeds Ear is so tired of..."

"Daily Kos"
"Sarah Palin is a woman who simply will not be cheated out of more than her fair share of the wattage of whatever limelight is shining, and given the leaks, lies and refutations about the content of her own book, it's probably best for readers interested in Palinology to take hold of a more disinterested volume before diving into "Going Rogue" head first. Conroy's and Walshe's book would seem to be a bracing pre-read that doesn't hesitate to outline her flaws while still keeping sight of the personality that appealed to the right-wing white base. She's not a caricature in this account, even if she still ends up as something of an enigma....Such scoopish tidbits like the never-heard speech are planted throughout "Sarah from Alaska". Readers can learn more about the exorbitant wardrobe purchases, staff firings in Alaska, the clandestine arrangements to bring her to McCain for her initial interview, staff reactions to the Charles Gibson and Katie Couric interviews, and backbiting and intrigue that began early on between the McCain and Palin campaign staffs....Sarah Palin, whether she winds up in the primaries or not, is clearly at Ground Zero in the battle for the heart and soul of the Republican Party. "Sarah from Alaska" opens the door for a deeper look at her ideology, her path to power, and her version of herself as no-nonsense streetfighter who is also some sort of a victim of the modern media environment and coastal liberal snobs. Holding such contradictions together in the package of one person seems impossible, but for now she's pulling it off. Just as Republicans are hoping they can, as a party."

Sam Tanenhaus"The New Yorker"
"[A] balanced and well-reported... account of Palin's career."
Anchorage Daily News
"A pleasant relief from all those pro- and anti-screeds Ear is so tired of..."

Shushannah Walshe was a reporter and producer at the Fox News Channel from August of 2001 until the end of the 2008 presidential campaign. As a member of the Fox News political unit, she covered Sarah Palin's vice presidential campaign from start to finish. Walshe has made on-air appearances on several Fox News programmes, including "On the Record with Greta van Susteren," "The Live Desk," and "America's Newsroom." Scott Conroy is a four-year veteran of CBS News, working at the CBS News Washington bureau and as a political reporter and blogger for CBSNews.com. He appeared on camera for stories that aired on the "CBS Evening News" and "The Early Show" weekend editions and filed many live and taped reports for CBS News Radio and affiliates across the country. He covered Sarah Palin's historic vice presidential campaign for the network.

GOR001710170
Sarah from Alaska: The Sudden Rise and Brutal Education of a New Conservative Superstar by Scott Conroy
Scott Conroy
Used - Very Good
Hardback
INGRAM PUBLISHER SERVICES US
2009-11-12
320
1586487884
9781586487881
N/A
Book picture is for illustrative purposes only, actual binding, cover or edition may vary.
This is a used book - there is no escaping the fact it has been read by someone else and it will show signs of wear and previous use. Overall we expect it to be in very good condition, but if you are not entirely satisfied please get in touch with us.