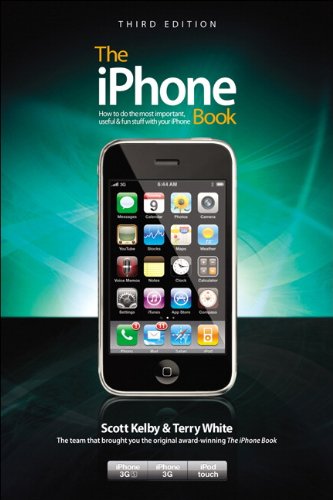 In Stock
$9.99
+10% GST
In this updated volume, authors Kelby and White cover the iPhone 3G S and such features as video camera, voice control, and higher speed. The show-me-how-to-do-it book skips all the confusing techno-jargon and just explains in plain simple English exactly how to use iPhone features.
Very Good
Only 2 left

If you're looking for a book that focuses on just the most important, most useful, and most fun stuff about your iPhone 3G or 3GS-you've found it.

There are basically two types of iPhone books out there: (1) The "tell-me-all-about-it" kind, which includes in-depth discussions on everything from wireless network protocols to advanced compression codes. (2) Then there's this book, which instead is a "show-me-how-to-do-it" book that skips all the confusing techno-jargon and just tells you, in plain, simple English, exactly how to use the iPhone features you want to use most.

The iPhone Book is from Scott Kelby, the award-winning author of the smash bestseller, The iPod Book, who takes that same highly acclaimed, casual, straight-to-thepoint concept and layout and brings it to learning Apple's amazing iPhone. Scott teams up once again with gadget guru and leading iPhone authority Terry White to put together a book that is an awful lot like the iPhone itself-simple to use and fun to learn. The book's layout is brilliant, with each page covering just one single topic, so finding the information you need is quick and easy, with a large full-color photo on each page so you can see exactly how it works.

The first edition of this book was named Best Computer Book of 2007 and, since then, Scott and Terry added even more tips and more tricks, and made it even easier by focusing on just the most useful and most requested iPhone 3G and 3GS features, so you can start really using your iPhone today!


Terry White is a well-known gadget guru, and the man behind the popular Terry White's Tech Blog. He is host of the top-ranked Adobe Creative Suite Video Podcast, winner of the Best of 2006 People's Choice Award on Apple's iTunes, and President of MacGroup-Detroit, Michigan's largest Macintosh users' group. He is also the author of Secrets of Adobe Bridge and co-author of InDesign CS/CS2 Killer Tips.

GOR002608299
The iPhone Book, Third Edition (Covers iPhone 3GS, iPhone 3G, and iPod Touch) by Scott Kelby
Scott Kelby
Used - Very Good
Paperback
Pearson Education (US)
2009-08-27
312
0321647238
9780321647238
N/A
Book picture is for illustrative purposes only, actual binding, cover or edition may vary.
This is a used book - there is no escaping the fact it has been read by someone else and it will show signs of wear and previous use. Overall we expect it to be in very good condition, but if you are not entirely satisfied please get in touch with us.