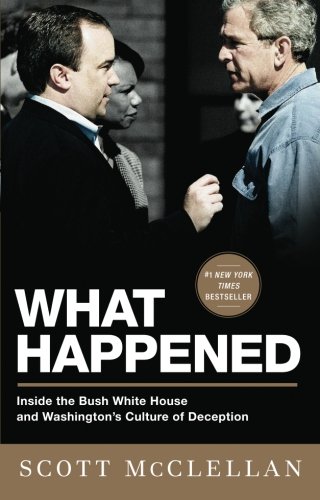 What Happened
by Scott McClellan

Used Price
$34.99
inc. GST
Free Shipping in Australia
Takes readers behind the scenes of the presidency of George W Bush. This book offers fresh perspective on what happened and why it happened the way it did, including the Iraq War, Hurricane Katrina, Washington's bitter partisanship and 2 hotly-contested presidential campaigns.
Reviews:
Trustpilot
Very Good

What Happened: Inside the Bush White House and Washington's Culture of Deception by Scott McClellan

In the bestselling book that provoked a media sensation, former White House press secretary Scott McClellan takes readers behind the scenes of the presidency of George W. BushScott McClellan was one of a few Bush loyalists from Texas who became part of his inner circle of trusted advisers, and remained so during one of the most challenging and contentious periods of recent history. Drawn to Bush by his commitment to compassionate conservatism and strong bipartisan leadership, McClellan served the president for more than seven years, and witnessed day-to-day exactly how the presidency veered off course.In this refreshingly clear-eyed book, written with no agenda other than to record his experiences and insights for the benefit of history, McClellan provides unique perspective on what happened and why it happened the way it did, including the Iraq War, Hurricane Katrina, Washington's bitter partisanship and two hotly-contested presidential campaigns. He gives readers a candid look into what George W Bush is and what he believes and into the personalities, strengths, and liabilities of his top aides. Finally, McClellan looks to the future, exploring the lessons this presidency offers the American people as they prepare to elect a new leader.

"Seattle Post-Intelligencer," June 5, 2008
"Once smoke clears, McClellan will be seen as a true patriot."
"Associated Press," June 20, 2008
"McClellan has burned the talking points -- and his bridges -- in writing this book, and the results are a more sophisticated assessment than most anything his former colleagues turned out. "What Happened" provides a telling and unflattering glimpse of Bush and his White House, also makes an important commentary on Washington's poisonous political climate -- one that Bush promised to change, but did not, McClellan writes."

GOR002331705
What Happened: Inside the Bush White House and Washington's Culture of Deception by Scott McClellan
Scott McClellan
Used - Very Good
Paperback
INGRAM PUBLISHER SERVICES US
2009-06-04
368
1586487000
9781586487003
N/A
Book picture is for illustrative purposes only, actual binding, cover or edition may vary.
This is a used book - there is no escaping the fact it has been read by someone else and it will show signs of wear and previous use. Overall we expect it to be in very good condition, but if you are not entirely satisfied please get in touch with us.