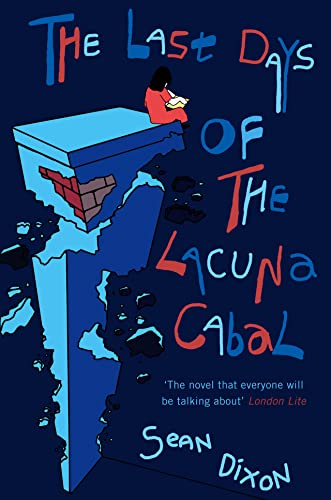 The Last Days of the Lacuna Cabal
by Sean Dixon

An original, mischievous rites of passage novel which will delight fans of offbeat fiction such as `Salmon Fishing in the Yemen'.

The Last Days of the Lacuna Cabal Summary

The Last Days of the Lacuna Cabal by Sean Dixon

An original, mischievous rites of passage novel which will delight fans of offbeat fiction such as `Salmon Fishing in the Yemen'.

The Lacuna Cabal Montreal Young Women's Book Club is THE foremost book club in Canada, no, in the world. Priding themselves on their good taste, intelligent discussions and impeccable opinions, they are a group of misfits and oddballs, living on the edge of normality. There are only two rules: what Missy says goes (ok, there is a nod to democracy but let's be honest here) and NO BOYS. EVER.

Of course, the premier book club in the world must read the first book ever written: 'The Epic of Gilgamesh'. But this monumental book leads them to break all their rules, shed members who end up missing out on EVERYTHING, and travel across the open seas to Bahrain in search of a wise man who'll hopefully have all the answers.

Original, funny, quixotic and ultimately very moving, The Last Days of the Lacuna Cabal is set in a time of upheaval: the Iraq war is exploding and people across the world are marching in protest. It's the story of a group of friends who find a family of sorts within their book group, who learn to cope with love, and the lack of it, loss, and the lack of that, and with growing up in a world that is falling apart.

Customer Reviews - The Last Days of the Lacuna Cabal

The Last Days of the Lacuna Cabal Reviews

`The novel everyone will be talking about'
London Lite

`[A] sweet, unpredictable novel...ingenious and openly written`
Time Out

`The Lacuna Cabal Montreal Young Women's Book Club is unconventional in more ways than one - namely that its members don't do much reading! But they do share a bond and help each other to cope with the changing world in this fab book. 4 stars'
OK! Magazine

`A sort of Tristram Shandy for the twenty-first century...It'll blow your mind.'
Michael Redhill

`Dixon's talents, however, extend beyond theatrics: flashbacks and set pieces are tightly written and offer the full-bodied coherence one expects from a novel.'
Quill & Quire

'What makes Sean Dixon's first novel so electrifyingly smart and charming is its abundant passion.'
The Georgia Straight

'[In] this ambitious book...Dixon has fashioned his make-believe to be relevant, offered a satisfying harvest from early planted seeds, and embedded some fine intellectual levity.'
The Globe and Mail

'Every chapter is filled with biff, bang, pow surprises! Suspend your disbelief and thrill in the oddities.'
She Does the City.com

`Sean Dixon is a worthy successor to some of Canada's foremost authors. He is in possession of an imaginative gift akin to Timothy Findley, the erudition and style of Robertson Davies and the off beat humor of Mordecai Richler. And like them, he is deserving of recognition and a following south of the border'
Bruce Bauman, author of And The Word Was

Sean Dixon is a full-time writer, occasional essayist, stage actor and banjoist. He gave up jobs as a shipper-receiver, a poster boy (of the putting up on billboards variety) and a prison driver to become a writer. His young adult novel, The Feathered Cloak, was published by Key Porter in Autumn 2007. He lives and plays banjo in Toronto and is currently working on his next novel for HarperCollins.

GOR005382370
The Last Days of the Lacuna Cabal by Sean Dixon
Sean Dixon
Used - Very Good
Paperback
HarperCollins Publishers
2009-03-05
352
0007268572
9780007268573
N/A
Book picture is for illustrative purposes only, actual binding, cover or edition may vary.
This is a used book - there is no escaping the fact it has been read by someone else and it will show signs of wear and previous use. Overall we expect it to be in very good condition, but if you are not entirely satisfied please get in touch with us.