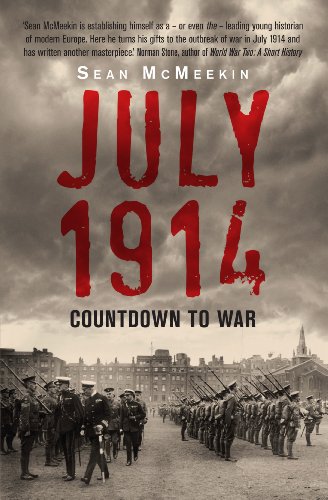 On 28 June 1914 Archduke Franz Ferdinand was assassinated in Sarajevo. A little over a month later the world was engulfed in the bloodiest conflict mankind had ever seen. How did such tragedy unfold so quickly?

The outbreak of the First World War was 'a drama never surpassed'.

One hundred years later, the characters still seem larger than life: Archduke Franz Ferdinand, brooding heir to the Habsburg throne; the fanatical Bosnian Serb assassins who plot to murder him; Conrad and Berchtold, the Austrians who exploit the outrage; Kaiser Wilhelm and Bethmann Hollweg, backing up the Austrians; Sazonov, Russian Foreign Minister, trying to live down a reputation for cowardice; Poincare and Paleologue, two French statesmen who urge on the Russians; and not least Winston Churchill, who, alone among Cabinet officials in London, perceives the seriousness of the situation in time to take action.

July 1914 tells the story of Europe's countdown to war through the eyes of these men, between the bloody opening act on 28 June 1914 and Britain's final plunge on 4 August, which turned a European conflict into a world war. The outbreak of war was no accident of fate. Individual statesmen, pursuing real objectives, conjured up the conflict - in some cases by conscious intention. While some sought honourably to defuse tensions, others all but oozed with malice as they rigged the decks for war.

Dramatic, inevitably tense and almost forensically observed, Sean McMeekin's unique book retells the story of that cataclysmic month, making clear as never before who was responsible for the catastrophe. You will never think the same way again about the origins of the First World War.
'A work of meticulous scholarship ... McMeekin's description of the details of life in the European capitals - small events that influenced great decisions - makes July 1914 irresistible.' -- Roy Hattersley * Times *
'A genuinely exciting, almost hour-by-hour account of the terrible month when Europe's diplomats danced their continent over the edge and into the abyss.' -- Nigel Jones * BBC History Magazine *
'Sean McMeekin's splendid July 1914 unravels all the shenanigans, bluffs and bunglings by which Europe's leaders and diplomats turned a minor murder in a Balkans backwater into total war ... There are scenes in July 1914 that linger long after the cover is closed.' -- John Lewis-Stempel * Sunday Express *
'McMeekin shows us precisely why the conflict happened ... [he] tells these stories with clarity and skill, drawing expert portraits of all the characters involved.' -- Keith Lowe * Mail on Sunday *
'Learned, punchy and enjoyable ... the book reads like a crime drama.' -- Christopher Clark * London Review of Books *
'A refreshingly original counterpoint to the traditional focus' -- Bronwen Maddox * Prospect *
'A shocking history, told with edgy, angry authority.' -- Iain Finlayson * Saga Magazine *
'Sean McMeekin, in July 1914, [offers a] new perspective ... McMeekin has chosen the zoom lens. He opens with a crisp but vivid reconstruction of the double murder in the sunshine of Sarajevo, then concentrates entirely on unraveling the choreography day by day.' -- Harold Evans * New York Times Book Review *
'[A] detailed account of the events and decisions that marked the road to war' * Times Higher Education *
'[McMeekin] has ... literary and historical skill to make this a page-turning read.' * Literary Review *
[A] superbly researched political history of the weeks between the assassination of Austria's Archduke Franz Ferdinand and the beginning of World War I.... McMeekin's work is a fine diplomatic history of the period, a must-read for serious students of WWI, and a fascinating story for anyone interested in modern history.' -- Publishers Weekly * Publishers Weekly *
'McMeekin's chronicle of these weeks in July 1914: Countdown to War is almost impossible to put down.... [McMeekin] delivers a punchy and riveting narrative of high politics and diplomacy over the five weeks after Sarajevo, more or less day by day, dwelling on small groups of decision-makers in and between the various capitals, and their interactions, by turns measured, perplexed, cordial, artful, angry, even tearful.' -- RJW Evans * The New York Review of Books *
'[A] thoroughly rewarding account that spares no nation regarding the causes of World War I.... McMeekin delivers a gripping, almost day-by-day chronicle of the increasingly frantic maneuvers of European civilian leaders who mostly didn't want war and military leaders who had less objection.' * Kirkus Reviews *
'Sean McMeekin is establishing himself as a-or even the-leading young historian of modern Europe. Here he turns his gifts to the outbreak of war in July 1914 and has written another masterpiece.' -- Norman Stone * author of World War Two: A Short History *
'Alluding to historical controversies, McMeekin ably delivers what readers demand from a WWI-origins history: a taut rendition of the July 1914 crisis.' -- Booklist
'Blending scholarly research with a breezy and descriptive writing style, McMeekin makes a reader feel like a firsthand witness to the key events of that fateful summer ... a primer for today's diplomats on how not to allow a small event to spiral out of control into a major war.' * Columbus Dispatch *
'A fascinating account' -- Giles MacDonogh * author of Prussia *
'[McMeekin's] research skills are obviously admirable and his sources are impressive ... this is an excellent account of the days between the Sarajevo assassination and the outbreak of the First World War.' * The European Royal History Journal *
'This is a meticulously researched and vividly written reconstruction of the decisions that led to war in July 1914. McMeekin captures the human drama of this fateful month and offers a provocative assessment of the different players' moral responsibility.' -- James Sheehan, author of 'Where Have All the Soldiers Gone?: The Transformation of Modern Europe'
'Winners write the histories, so wars are misunderstood. Sean McMeekin takes a wider stance to get a fresh angle of vision on The Great War, and casts all war-making in a new light.' -- Charles Hill, Diplomat in Residence at Yale University, Research Fellow at the Hoover Institution, and author of 'Trial of a Thousand Years: World Order and Islamism'
'Sean McMeekin has given us a riveting and fast-paced account of some of the most important diplomatic and military decisions of the 20th century. He depicts with chilling clarity the confusion, the incompetence, and the recklessness with which Europe's leaders went to war in that fateful summer. Any understanding of the world we inhabit today must begin with an examination of the events of July 1914. McMeekin provides his readers with a balanced and detailed analysis of the events that gave birth to the modern age.' -- Michael Neiberg, author of 'The Blood of Free Men'
Sean McMeekin's books include The Berlin-Baghdad Express, The Ottoman Empire and Germany's Bid for World Power (Penguin/Allen Lane) and The Russian Origins of the First World War (Harvard University Press). He lives in Istanbul with his wife, Nesrin, and their daughter, Ayla.
GOR008974758
9781848315938
1848315937
July 1914: Countdown to War by Sean McMeekin
Sean McMeekin
Used - Like New
Hardback
Icon Books Ltd
2013-07-04
560
N/A
Book picture is for illustrative purposes only, actual binding, cover or edition may vary.
The book has been read, but looks new. The book cover has no visible wear, and the dust jacket is included if applicable. No missing or damaged pages, no tears, possible very minimal creasing, no underlining or highlighting of text, and no writing in the margins
Trustpilot