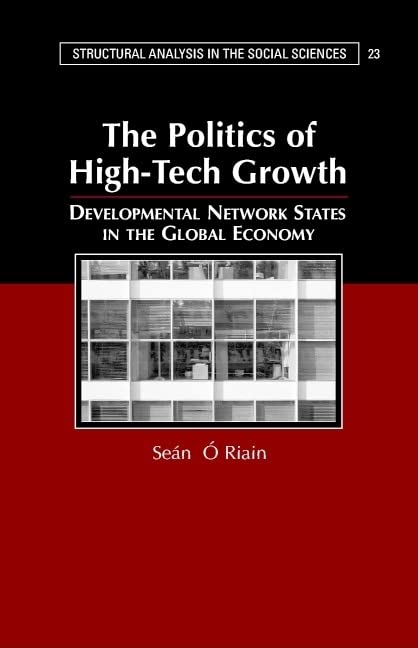 Out of Stock
$55.99
inc. GST
The book provides a detailed study of the software industry in Ireland, of the state policies that promoted it, the political institutions which made that possible and of how similar institutions have been central to other high-tech regions in Taiwan, Israel and elsewhere.
Good
Only 0 left

This book argues that beneath the Irish trade and foreign investment boom lies a more interesting story of regional innovation promoted by an alliance between the state and local technical communities. This alliance was governed through a decentralized set of state institutions, drawing on 'global' and 'local' economic and political resources. This 'Developmental Network State' has had a significant impact on the growth of Ireland's high tech cluster and is central to the emergence of an international network of 'global high tech regions' from Silicon Valley to Ireland, Taiwan, and Israel. The book provides a detailed study of the rise of the software industry in Ireland and of the state institutions and political conditions which promoted it. It shows how new 'network state' policies and institutions have been central to high tech regions elsewhere.

'Sean O Riain has written a splendid book. It contains a lot of new and novel evidence about the relationship between states and economic development, and it is particularly insightful in making sense of how small states adjust to the opportunities and constraints presented by the world economy. I highly recommend it.' Neil Fligstein, University of California-Berkeley
'It would be difficult to exaggerate the importance of this book. It is in my view the most insightful account of the dynamics shaping modern Ireland since Professor Joe Lee's classic Ireland: Politics and Society 1912-1985.' Peadar Kirby, Village
"O'Riain makes a very important contribution to comparative studies of development by arguing that the same model of network development can be inspired by very different political ideologies. He focuses the attention on neo-liberalism, conservatism (i.e. paternalism) and social democracy. Each of these three ideologies goes hand in hand with a different set of political bargains over socioeconomic inequality, risk, security, governance. This is in essence the powerful message that this book offers to students of economic development: politics does not stand in the way of economic development; rather, different political patterns shape the way a country achieves economic well-being and have distinct consequences for the distribution of new riches across the population." --Social Forces, Mauro F. Guillen, University of Pennsylvania

GOR010218955
The Politics of High Tech Growth: Developmental Network States in the Global Economy by Sean O'Riain (National University of Ireland, Maynooth)
Sean O'Riain (National University of Ireland, Maynooth)
Structural Analysis in the Social Sciences
Used - Good
Hardback
Cambridge University Press
2004-04-26
288
0521830737
9780521830737
N/A
Book picture is for illustrative purposes only, actual binding, cover or edition may vary.
The book has been read but remains in clean condition. All pages are intact and the cover is intact. Some minor wear to the spine.