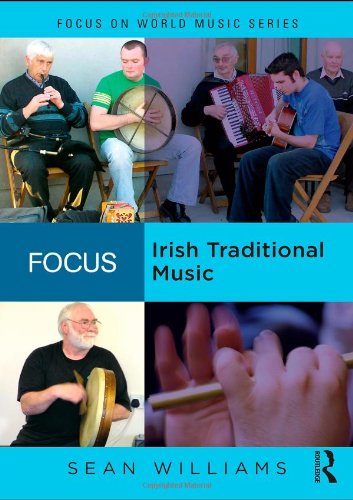 Used Price
$104.99
inc. GST
Free Shipping in Australia
Offers an introduction to the instrumental and vocal traditions of the Republic of Ireland and Northern Ireland, as well as Irish music in the context of the Irish diaspora. This title features an accompanying CD that presents both traditional and contemporary sounds of Irish music at home and abroad.
Reviews:
Trustpilot
Good

Focus: Irish Traditional Music is an introduction to the instrumental and vocal traditions of the Republic of Ireland and Northern Ireland, as well as Irish music in the context of the Irish diaspora. Ireland's size relative to Britain or to the mainland of Europe is small, yet its impact on musical traditions beyond its shores has been significant, from the performance of jigs and reels in pub sessions as far-flung as Japan and Cape Town, to the worldwide phenomenon of Riverdance. Focus: Irish Traditional Music interweaves dance, film, language, history, and other interdisciplinary features of Ireland and its diaspora. The accompanying CD presents both traditional and contemporary sounds of Irish music at home and abroad.

Sean Williams, Ph.D. is Professor of Ethnomusicology at The Evergreen State College in Olympia, Washington.

List of Figures Musical Examples on Compact Disc About the Author Series Foreword by Michael B. Bakan Preface PART I Irish Music in Place and Time 1 Looking In from the Outside Locating Ireland in Space and Time What's in a Name? Irish Musical Processes Attending an Irish Music Session 2 Roots and Branches of Gaelic Ireland Prehistoric Ireland Telling the Early Stories Brigid and Patrick The Arrival of the Vikings and Normans The Time of the Bards 3 "Hang All Harpers Where Found" Completing the Conquest The Soul of a Nation The Great Hunger Cultural Revival and the "Celtic Twilight" Ireland Since Independence PART II Music Traditions Abroad and at Home 4 Music of the "Celtic" Nations Scotland Celtic Britain: Wales, Northumbria, Cornwall, and the Isle of Man Celtic Western Europe: Brittany, Galicia 5 The Green Fields of America The "Great Migration" of the Scotch-Irish Searching for Home Minstrels, Music Halls, and Movies Irish Music Around the World 6 Irish Instrumental Music Musical Instruments The Forms of Irish Instrumental Music Matters of Style PART III Focusing In: Vocal Music in Irish-Gaelic and English 7 Vocal Music in Irish-Gaelic An Introduction to the Language Sean-nos Singing Other Irish-language Songs Macaronic Songs 8 Vocal Music in English The English-Language Ballad in Ireland Lyric Love Songs Praise Songs Contemporary Songwriting How Do They Do That? 9 Traditional Music and Dance in a Contemporary World Competitions and Festivals Musical Notation Dancing Feet, On and Offstage The Revival(s) Conclusions Glossary Additional Resources Listening Guide References Index