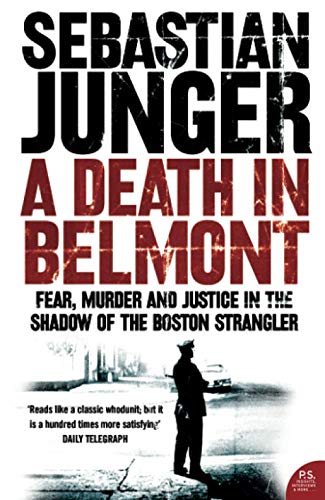 A Death in Belmont
by Sebastian Junger

A compelling portrait of 1960s America that takes as its starting point the brutal events of 11 March 1963, the day on which the lives of three complete strangers - a black handyman, an Italian-American carpenter and a second-generation Jewish housewife - collided in the leafy Boston suburb of Belmont.

A Death in Belmont Summary

A Death in Belmont by Sebastian Junger

A compelling portrait of 1960s America that takes as its starting point the brutal events of 11 March 1963, the day on which the lives of three complete strangers - a black handyman, an Italian-American carpenter and a second-generation Jewish housewife - collided in the leafy Boston suburb of Belmont.

These three people did not know one another, but, by the end of the day, the housewife had been raped and strangled, the handyman had been arrested on suspicion of being the notorious Boston Strangler, and the real Boston Strangler - carpenter Al DeSalvo - had returned home to his wife and children. It was not until two years later that DeSalvo admitted to the gruesomely violent murders of thirteen women. Also unwittingly drawn into the drama were one-year-old Sebastian Junger's own family, who posed for a photograph with DeSalvo the day after the Belmont strangling, at the completion of his work on their studio.

Taking the chilling family snap as his inspiration, Junger explores the worlds of the three protagonists and, in so doing, creates a portrait of America in the 1960s that touches on the historic themes of the era: the assassination of JFK, the rise of the immigrants and the troubling race relations that prefigured the death of Martin Luther King.

This new work by Sebastian Junger, the acclaimed author of `Perfect Storm' and `Fire', is as enlightening as it is haunting. Taking as its foundation the events that shocked a quiet community in 1963, `A Death in Belmont' expands to encompass an entire nation at a time of extraordinary social turmoil.

A Death in Belmont Reviews

`The great merit of Junger's thoughtful book is that he is constantly striving to go beyond the obvious...True crime stories in which the wrong man is sent down are a dime to the dozen. But Sebastian Junger's elegant and gripping book rises above the herd because he is unafraid to confront the ambiguity of human memory, and because he admits the impossibility of discovering the `absolute truth' of what happened that day in Belmont...Superbly researched and tautly written, "A Death in Belmont" reads like a classic whodunit; but it is a hundred times more satisfying.' The Telegraph

`Junger is a master of narrative, his bold, clear-eyed prose never lags. His story tells us a great deal about America in the middle decades of the 20th century, about the operations of race, class (and the violence of prejudice) permeated and, in a sad way, defined a society.' The Guardian

`A lucid study of crime and justice in 1960s America...compelling.' Independent on Sunday

`Junger's storytelling is at its best when weaving the case's minute detail into the larger picture of the dark times experienced by the US in the 1960s.' Financial Times

`It is written in the beautifully cool, precise, easy style of the best American journalism. There is a fascinating detail on every page.' Mail on Sunday

'An interesting meditation on the American judicial and penal systems and, in particular, their attitude to the issue of race'. Daily Telegraph

'Junger masterfully draws out his narrative out of the labyrinthine investigation.' Observer

Sebastian Junger grew up in New England and has worked as a tree-feller, Bosnian correspondent, journalist and adventurer. His first book, `The Perfect Storm', spent over four years on the bestseller lists and its film adaptation was a huge box-office success. Junger is a contributing editor to Vanity Fair, and winner of the National Magazine Award for Reporting. He has also written for magazines including Harper's, the New York Times Magazine, and National Geographic Adventure.

GOR001727803
A Death in Belmont by Sebastian Junger
Sebastian Junger
Used - Very Good
Paperback
HarperCollins Publishers
2007-05-01
256
0007200064
9780007200061
Short-listed for CWA Non-Fiction Gold Dagger 2006
Book picture is for illustrative purposes only, actual binding, cover or edition may vary.
This is a used book - there is no escaping the fact it has been read by someone else and it will show signs of wear and previous use. Overall we expect it to be in very good condition, but if you are not entirely satisfied please get in touch with us.