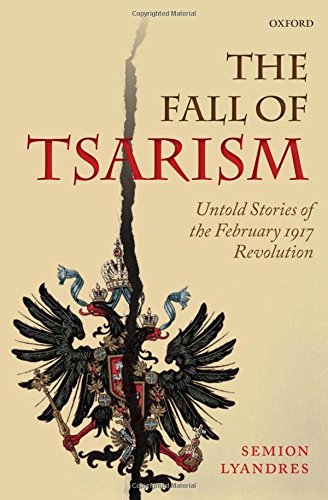 Out of Stock
$23.49
+10% GST
Reveals to the world for the first time a unique and hitherto undiscovered selection of interviews with leading participants in the February Revolution of 1917, representing the most significant contemporary testimony on the overthrow of Europe's last old regime.
Very Good
Only 0 left

The Fall of Tsarism Summary

The Fall of Tsarism contains a series of gripping, plain-spoken testimonies from some of the leading participants of the Russian Revolution of February 1917, including the future revolutionary premier Alexander Kerenskii. Recorded in the spring of 1917, months before the Bolsheviks seized power, these interviews represent the earliest first-hand testimonies on the overthrow of the Tsarist regime known to historians. Hidden away and presumed lost for the better part of a century, they are now revealed to the world for the first time.

The Fall of Tsarism Reviews

For anyone with even a passing interest in the last days of Tzarism. * K. C. O'Connor, CHOICE *
This is an extremely important book, both because of the remarkable treasure trove of unique new primary sources that it brings to light and because of Lyandres preliminary assessment of their utility and meaning. It reopens important issues in the history of the February Revolution and is a book that anyone interested in the Russian Revolution will want, indeed need, to read. * Revolutionary Russia *
Semion Lyandres shines fresh light on the causes of the February Revolution. He has found important new sources and shows how they can be used to re-interpret the behaviour of leading figures like Alexander Kerensky and Mikhail Rodzyanko. This is an outstanding contribution to early twentieth-century Russian history. * Professor Robert Service, St Antonys College, Oxford *
fascinating and important... the intrinsic interest and importance of these accounts is sufficient to captivate the reader and enhance our understanding of the February Revolution. * Catherine Andreyev, English Historical Review *
This is a landmark publication that will change the interpretation of the February Revolution of 1917 in Russia ... Lyandres has made an immense contribution. From now on, no book on the February Revolution shall be written without careful examination of these interviews. * Tsuyoshi Hasegawa, The Historian *
an exemplary scholarly edition ... This book is a very valuable addition to the sources available for the study of February 1917 * Peter Waldron, European History Quarterly *
The volume, which scholars will eagerly welcome, should also prove of interest to a wider reading public. We owe a debt of gratitude to Semion Lyandres for his persistence and his admirable presentation of these important testimonies of the revolution. * Jonathan Daly, History *

Semion Lyandres is Associate Professor of Modern Russian History, University of Notre Dame, and author of The Bolshevik's German Gold Revisited: An Inquiry into the 1917 Accusations (1995). He is also co-editor, with Dietmar Wulff, of the diaries of Petr P. Vologodskii.