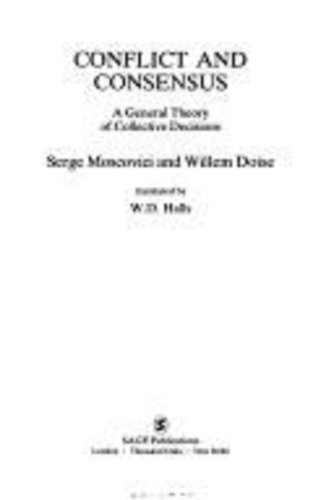 Conflict and Consensus by Serge Moscovici

Conflict and Consensus: A General Theory of Collective Decisions by Serge Moscovici

This book presents a bold new theory of the processes of collective decision-making that draws on theoretical influences ranging from group decision theory through to the authors' own social representations theory. Moscovici and Doise offer a novel analysis of group conflict and the construction of consensus to produce a general theory of collective decisions.

Going beyond the traditional view that compromise is a negative process where group members merely comply in order to sustain cohesion, the authors argue that the conflict at the root of group decisions can be a positive force leading to changes in opinion and to innovation. Their theoretical framework is illustrated in depth with numerous empirical investigations from around the world.

`Useful to those interested in group dynamics, the book discusses topics such as groups' functions, decision making, group conflict and consensus and the role of values in that process, and communication' - Choice

`A complex and sophisticated argument is fully and clearly detailed by the authors. From a dispute resolution point of view, their analysis and conclusions are important as they address some of the basic concerns that arise in any disputing situation. A careful study of the material offered will be well repaid in one's understanding of, and ability to assist in, the process of consensus development for groups of any substantial size' - The Alternative Newsletter

`Essential reading for social and organizational psychologists, management scholars and anyone working on intergroup relations and conflict issues' - European Foundation for Management Development

`Moscovici and Doise's remarkable monograph supplies the strongest argument possible for revisiting experimental social psychology and to go beyond the intuitively attractive but theoretically insubstantial management literature on groups. They have conducted an exhaustive and masterly review of the research evidence, convincingly and scrupulously demonstrating something quite unusual in the behavioural sciences: a set of reliable empirical truths underpinned by coherent and parsimonious theory... The central theme is... "group polarization", or the tendency for groups to resolve to consensus around more extreme positions than the average positions of their individual members... The authors' thesis is fundamentally social democratic and laden with optimism. In the absence of traditional authority or appeal to scientific truth, consensus in society can only be achieved by open exchange. Conflict and consensus, far from being hostile opposing principles, are part of a constructive dialectic, which can culminate in no less than what they call the "reinvigoration of society"... the book is a classic statement in one of the most important domains of psychology, and has the most far-reaching implications for how we use and misuse groups in organizations' - Personnel Psychology

Introduction The Problem What Use Are Groups? The Elementary Forms of Participation in Decisions and Consensus Extreme Conflicts and Consensuses The Effects of Private or Public Discussions Conflicts and Extreme Consensuses The Role of Values `Warm and Cold' Communications Consensus in Closed and Open Groups Decision-Making
GOR011251293
Conflict and Consensus: A General Theory of Collective Decisions by Serge Moscovici
Serge Moscovici
Used - Like New
Paperback
SAGE Publications Ltd
1994-08-04
224
080398457X
9780803984578
N/A
Book picture is for illustrative purposes only, actual binding, cover or edition may vary.
The book has been read, but looks new. The book cover has no visible wear, and the dust jacket is included if applicable. No missing or damaged pages, no tears, possible very minimal creasing, no underlining or highlighting of text, and no writing in the margins
Trustpilot