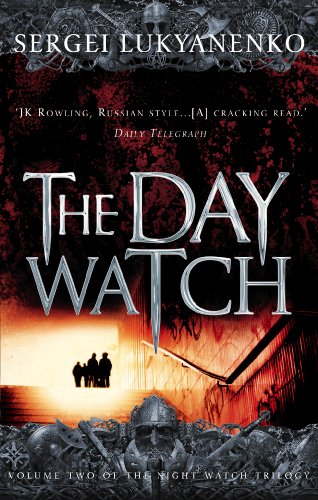 The Day Watch
by Sergei Lukyanenko

In Stock
$14.49
inc. GST
In The Day Watch, second book of the Night Watch trilogy, Alice, a young but powerful Dark Other, attends a planning meeting with her comrades in the Day Watch.
Like New Very Good Good
Only 1 left

Walking the streets of Moscow, indistinguishable from the rest of its population, are The Others. Possessors of supernatural powers and capable of entering the Twilight, a shadowy world that exists in parallel to our own, each owes allegiance either to The Dark or The Light. In The Day Watch, second book of the Night Watch trilogy, Alice, a young but powerful Dark Other, attends a planning meeting with her comrades in the Day Watch. The team is on a mission to apprehend an uninitiated Other, a practicing Dark witch who has so far eluded the bureaux responsible for finding and initiating unlicensed practitioners of magic. It seems a routine operation. But when they arrive, the Night Watch team has already made the arrest. A fierce battle ensues, during which Alice almost dies. Drained of her powers, she is sent to recuperate at a youth camp near the Black Sea. There she meets Igor; the chemistry between them is instant and irresistible. But then comes a shattering realisation: Igor is a Light Mage. Suddenly Alice remembers him as one of those involved in the battle that left her crippled. Now that they know, there is no alternative to a magical duel, a battle that neither of them wants to win...

"Praise for The Night Watch: This modern day mythical fantasy is Anne Rice on an epic scale, a hugely imagined world. A chiller thriller from cold of Russia, this one's been selling like hot cakes around the world." * Sunday Sport *
"So good that the film feels like a trailer for it" * Time Out *
"JK Rowling, Russian style... Arguably Russia's richest and most famous literary talent of the moment. [a] cracking read, owing more to Rowling or Philip Pullman than it does to the horror genre... Surprisingly readable and addictive... It relies on suspense and psychological drama and a good dose of humour - rather than blood and guts." * Daily Telegraph *
"When a particular kind of story, heavily based in one culture, gets transferred into a culture distinctly different, something magical happens. Something modern, new and distinctly creepy... The magic is rooted in the realities of modern Russia. Inventive, sardonic, and imbued with a surprising the sense that, for this author and his audience, much of this stuff is new-minted." * Independent *

In Russia, all volumes of the Night Watch series have sold over two million hardcovers between them. The Night Watch has been adapted into an internationally successful film, which has been distributed round the world. Sergei Lukyanenko lives in Moscow.

GOR010572794
The Day Watch: (Night Watch 2) by Sergei Lukyanenko
Sergei Lukyanenko
Night Watch
Used - Like New
Paperback
Cornerstone
2008-01-03
496
0099489937
9780099489931
N/A
Book picture is for illustrative purposes only, actual binding, cover or edition may vary.
This is a used book - there is no escaping the fact it has been read by someone else and it will show signs of wear and previous use. Overall we expect it to be in very good condition, but if you are not entirely satisfied please get in touch with us.