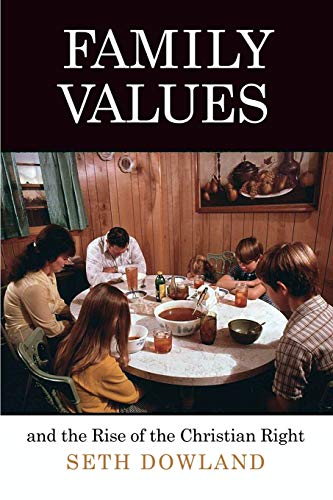 Family Values and the Rise of the Christian Right chronicles how the family values agenda became so powerful in American political life and why it appealed to conservative evangelical Christians.

Family Values and the Rise of the Christian Right Summary

During the last three decades of the twentieth century, evangelical leaders and conservative politicians developed a political agenda that thrust "family values" onto the nation's consciousness. Ministers, legislators, and laypeople came together to fight abortion, gay rights, and major feminist objectives. They supported private Christian schools, home schooling, and a strong military. Family values leaders like Jerry Falwell, Phyllis Schlafly, Anita Bryant, and James Dobson became increasingly supportive of the Republican Party, which accommodated the language of family values in its platforms and campaigns. The family values agenda created a bond between evangelicalism and political conservatism.

Family Values and the Rise of the Christian Right chronicles how the family values agenda became so powerful in American political life and why it appealed to conservative evangelical Christians. Conservative evangelicals saw traditional gender norms as crucial in cultivating morality. They thought these gender norms would reaffirm the importance of clear lines of authority that the social revolutions of the 1960s had undermined. In the 1970s and 1980s, then, evangelicals founded Christian academies and developed homeschooling curricula that put conservative ideas about gender and authority front and center. Campaigns against abortion and feminism coalesced around a belief that God created women as wives and mothers-a belief that conservative evangelicals thought feminists and pro-choice advocates threatened. Likewise, Christian right leaders championed a particular vision of masculinity in their campaigns against gay rights and nuclear disarmament. Movements like the Promise Keepers called men to take responsibility for leading their families. Christian right political campaigns and pro-family organizations drew on conservative evangelical beliefs about men, women, children, and authority. These beliefs-known collectively as family values-became the most important religious agenda in late twentieth-century American politics.

Customer Reviews - Family Values and the Rise of the Christian Right

Family Values and the Rise of the Christian Right Reviews

"'Family values' politics is omnipresent in the history and rhetoric (and study) of the Christian Right, yet what exactly does it mean, and how, why, and when did it gain such remarkable traction? Weaving a boldly and beautifully written story through the many stages of evangelical family life, grassroots activism, advocacy, and public policy, Seth Dowland tells us. His is the definitive study of a movement-a phenomenon-that has shaped modern American politics in its image."-Darren Dochuk, author of From Bible Belt to Sunbelt

"'Family values' has become ubiquitous in our culture and yet it has not received serious, thorough, and substantive analysis-until now. Seth Dowland has produced a smart, lively, and engaging book that makes important contributions to political, religious, and cultural history. This book should garner serious attention from a wide readership."-Matthew Avery Sutton, author of American Apocalypse: A History of Modern Evangelicalism

"Seth Dowland's monograph makes a fresh and valuable contribution to a densely populated literature, not simply with impressive research and writing, but with innovative engagement with the historical development of the contemporary Christian Right. . . . Dowland shows . . . that gender was not simply one issue among many but was the central organizing category, fundamental analytical logic, and discursive self-understanding."-Journal of Southern Religion

"As Seth Dowland explains, evangelicals hearkened to a past in which gender lines were clear. . . . It's a story that Dowland tells carefully and fairly."-Christian Century

"Dowland's work elucidates the underbelly of the Christian right movement and clarifies the importance of many topics to this group."-Political Science Quarterly

"What Dowland gives us is a remarkably perceptive analysis of white conservative evangelicals' beliefs about the family, the state, and American society. Other books may chronicle the history of the Christian Right, but few other works succeed so well in taking readers inside the mind of conservative evangelicals to explain how Christian Right activists think."-Reading Religion

GOR011099647
Family Values and the Rise of the Christian Right by Seth Dowland
Seth Dowland
Politics and Culture in Modern America
Used - Like New
Paperback
University of Pennsylvania Press
2018-09-21
280
0812224299
9780812224290
N/A
Book picture is for illustrative purposes only, actual binding, cover or edition may vary.
The book has been read, but looks new. The book cover has no visible wear, and the dust jacket is included if applicable. No missing or damaged pages, no tears, possible very minimal creasing, no underlining or highlighting of text, and no writing in the margins.