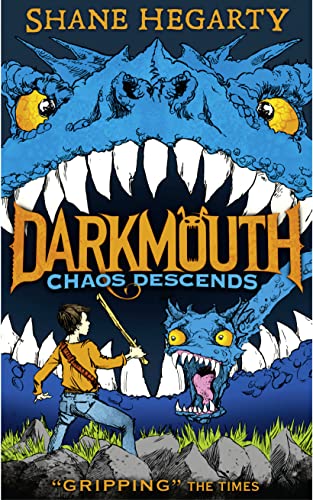 The third book in the monstrously funny and action-packed Darkmouth series. It's going to be legendary.

The third book in the monstrously funny and action-packed Darkmouth series. It's going to be legendary.

The adventures of the most unfortunate Legend Hunter ever to don fighting armour and pick up a desiccator continue...

Finn's been through so much, he'll now be allowed do what he wants with the rest of his life, right? Wrong.

Whether he likes it or not, he's going to be made a proper Legend Hunter. But then suddenly people start disappearing, Legends are appearing where they shouldn't, Broonie's complaining, and an attack so big is coming that Finn has the weight of the world on his shoulders.

The weight of two worlds, actually...

"Hilarious and exciting. Terrifying and heart-stopping. Everything a great fantasy series should be. The next big thing is here." Eoin Colfer, author of Artemis Fowl

"Hegarty writes surely, unpretentiously and amusingly, drawing up beguiling characters and constructing a plot which simply skips along. Great for primary school children studying myths and legends." The Times

"Hegarty understands the importance of humour for young readers. One of the great pleasures of being scared is the release of laughter that comes afterwards, and Darkmouth is peppered with sly, gentle wit." The Irish Times

"Believe the hype. The relationship between the young hero and his father is touching and real. There are touches of Ghostbusters, along with some Bond-like gadgets, plus a rather Dickensian setting (the mist-swirling town of Darkmouth). A stunning fantasy adventure." Sarah Webb

Shane Hegarty was the Arts Editor of the Irish Times, but left to be a full time writer after DARKMOUTH sold in a frenzied auction at Bologna Book Fair in 2013. He lives with his family near Dublin.

GOR010865404
Chaos Descends (Darkmouth, Book 3) by Shane Hegarty
Shane Hegarty
Darkmouth
Used - Like New
Hardback
HarperCollins Publishers
2016-04-07
432
0007545681
9780007545681
N/A
Book picture is for illustrative purposes only, actual binding, cover or edition may vary.
The book has been read, but looks new. The book cover has no visible wear, and the dust jacket is included if applicable. No missing or damaged pages, no tears, possible very minimal creasing, no underlining or highlighting of text, and no writing in the margins.