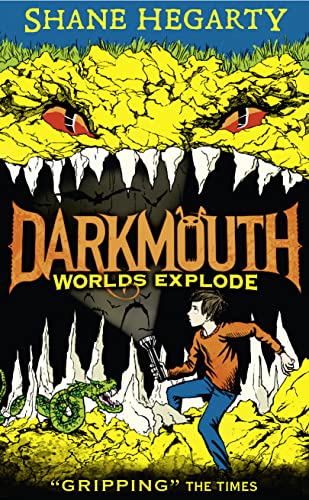 The second book in the monstrously funny and action-packed new series: Darkmouth. It's going to be legendary.

The second book in the monstrously funny and action-packed new series: Darkmouth. It's going to be legendary.

The adventures of the most unfortunate Legend Hunter ever to don fighting armour and pick up a Dessicator continue...

On a list of things Finn never thought he'd wish for, a gateway bursting open in Darkmouth was right up there. But that's about his only hope for finding his missing father. He's searched for a map, he's followed Steve into dead ends, but found nothing. And he's still got homework to do.

"Hilarious and exciting. Terrifying and heart-stopping. Everything a great fantasy series should be. The next big thing is here." Eoin Colfer, author of Artemis Fowl

"Hegarty writes surely, unpretentiously and amusingly, drawing up beguiling characters and constructing a plot which simply skips along. Great for primary school children studying myths and legends." The Times

"Hegarty understands the importance of humour for young readers. One of the great pleasures of being scared is the release of laughter that comes afterwards, and Darkmouth is peppered with sly, gentle wit." The Irish Times

"Believe the hype. The relationship between the young hero and his father is touching and real. There are touches of Ghostbusters, along with some Bond-like gadgets, plus a rather Dickensian setting (the mist-swirling town of Darkmouth). A stunning fantasy adventure." Sarah Webb

Shane Hegarty was the Arts Editor of the Irish Times, but left to be a full time writer after DARKMOUTH sold in a frenzied auction at Bologna Book Fair in 2013. He lives with his family near Dublin.

GOR007097557
Worlds Explode (Darkmouth, Book 2) by Shane Hegarty
Shane Hegarty
Darkmouth
Used - Very Good
Paperback
HarperCollins Publishers
2015-07-30
256
000813944X
9780008139445
N/A
Book picture is for illustrative purposes only, actual binding, cover or edition may vary.
This is a used book - there is no escaping the fact it has been read by someone else and it will show signs of wear and previous use. Overall we expect it to be in very good condition, but if you are not entirely satisfied please get in touch with us.