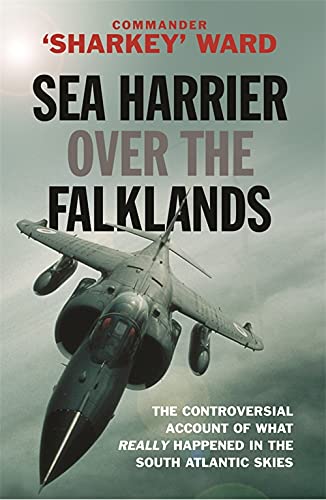 Sea Harrier Over The Falklands
by Sharkey Ward

In Stock
$17.49
inc. GST
The controversial account of what really happened in the south Atlantic skies
Very Good Good Well Read
15 in stock

Sea Harrier Over The Falklands Summary

Sea Harrier Over The Falklands by Sharkey Ward

Sharkey Ward commanded 801 Naval Air Squadron, HMS Invincible, was senior Sea Harrier adviser to the Command, flew over sixty missions and was awarded DSC. Yet had he followed all his instructions to the letter, Britain might well have lost the Falklands War.

His dramatic first-hand story of the air war in the South Atlantic is also an extraordinary, outspoken account of inter-Service rivalries, bureaucratic interference, and dangerous ignorance of the realities of air combat among many senior commanders. As Sharkey Ward reveals, the 801 pilots were fighting not just the enemy, exhaustion, and the hostile weather, but also the prejudice and ignorance of their own side.

Sea Harrier Over The Falklands Reviews

Nigel David Ward was born in Canada of 'RAF' parents in 1943 and joined the Britannia Royal Naval College, Dartmouth, as an Officer Cadet in 1962. After Basic Flying Training he completed his Fleet Air Arm training on Hunters and Sea Vixens before joining 892 Naval Air Squadron in 1969, where he flew the F-4K Phantom from the deck of the HMS Ark Royal. A qualified Air Warfare Instructor, he worked at the Ministry of Defence and in 1981 took command of 801 Naval Air Squadron in HMS Invincible. Commander Ward holds the Air Force Cross for services to maritime VSTOL aviation and was decorated with the Distinguished Service Cross in the Falklands Honours List.

GOR001237339
Sea Harrier Over The Falklands by Sharkey Ward
Sharkey Ward
Cassell Military Paperbacks
Used - Very Good
Paperback
Orion Publishing Co
2000-12-07
400
0304355429
9780304355426
N/A
Book picture is for illustrative purposes only, actual binding, cover or edition may vary.
This is a used book - there is no escaping the fact it has been read by someone else and it will show signs of wear and previous use. Overall we expect it to be in very good condition, but if you are not entirely satisfied please get in touch with us.